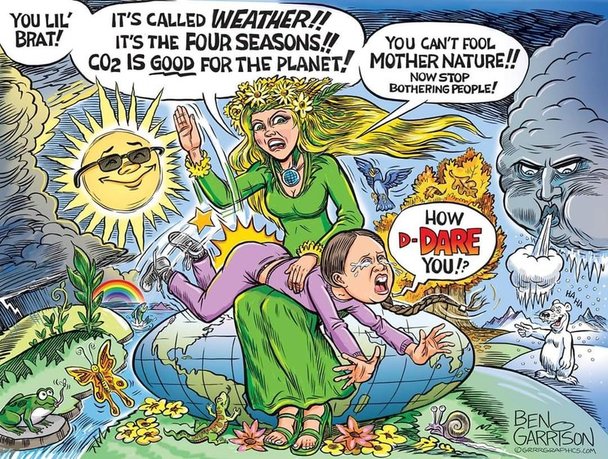 Of all the climate prophets of doom, Obama was the most damaging, he owns the 97% scientists agree lie and he is still at it.

Fortunately his shrill and petulant wailing is not sticking this time.

Obama is now claiming the planet will be uninhabitable unless Biden is elected.
View on Facebook
·Share

New Zealand chooses......more of the same!

There was hope for a change, but voters have overwhelmingly chosen to re-elect Jacinda Ardern and to continue the country’s journey to an imaginary Green-Left utopia.

Paying for the utopia is the missing part of the equation.

Prime Minister Jacinda Ardern comes across as warm and caring, that probably makes her more dangerous than the nastier characters in history who led their people to disaster.

Unfortunately, there is no law saying New Zealand has to remain a first world country with a high standard of living.

It is possible for a small democracy to collectively lose its mind and go off the edge of a cliff and it looks like that’s exactly what we’re doing.

It’s the new reality, but maybe I am wrong and the collective wisdom of my fellow New Zealanders is the right way to go....and it will all work out for the best.

Living in the wonderment bubble is a great place to be , I spend as much time as I can in there, the wonderment is the magical beauty and chemistry of our planet, forests, lakes, mountains covered in snow, birds, oceans, stars in the sky, jet planes, smart phones.....................

But there are those who have made it their mission to pop the wonderment bubble!

Senator Kamala Harris tried last night with her testimony at the hearing for the appointment of the next USA Supreme Court justice.

I expected nastiness from “Heels up Harris” and she didn’t disappoint, she used an old analogy that attempts to conflate tobacco companies denial of the health risks of smoking, with the fiction that human generated CO2 is changing the climate and it’s dangerous and it’s our fault and we need to do without our amazing planets gift of affordable and abundant energy to save our selves.

What a miserable place Harris and her followers come from, they live in their own bubbles full of gullibility, fatalism and superstition .

It is iloveco2’s and our followers mission to try and pop the warming lefts misery bubble with our message of optimism and scientific honesty.

At its very essence, it is good versus evil.

We have an almost unlimited source of energy from which the main side affect is extra Carbon Dioxide that increases crop yields.

Bountiful Energy and Food for Humans!

Thank you for the magic Mother Nature! ...

A new study further establishes a key truth about Carbon Dioxides (CO2) place in the chemistry of our world.

“despite an unprecedented decrease in carbon emission, (due to the COVID shutdown) there was an increase in atmospheric CO2 concentration, which followed a pattern similar to previous years”

“We conclude temperature changes lead to CO2 changes, not the other way around”

This vindicates iloveco2’s position that while a positive influence, human contributions of CO2 are insignificant and are lost in natural variability (we were fact-checked and judged false and shadow banned for expressing this opinion) and that historical records show rises in temperature preceed rises in CO2.

A new study concludes temperature changes lead to CO2 changes, not the other way around.
View on Facebook
·Share