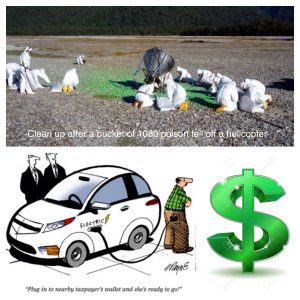 Where is a billion dollars of New Zealand (NZ) taxpayer money best spent?

Where would it actually make difference?

A billion Invested in high tech solutions that will save native birds species and stop the need for the decades old, indiscriminate and cruel use of 1080 poisoning.

A billion dollars invested in subsidized electric cars to look good too others at the next United Nations climate conference.

As part of their Carbon Dioxide (CO2) neutral plan, the new New Zealand government is preparing to spend billions of hard earned (or borrowed) taxpayer dollars to subsidize its citizens into electric cars.

NZ’s contribution to human made CO2 is minuscule! (one fifth of one percent) and trying to reduce it further with electric cars will make no difference to global temperatures, the only tangible result for all the treasure spent will be the momentary thrill of announcing the sacrifices made to the next United Nations (UN) climate conference.

Paradoxically while the Government has chosen to try and impress the world with its green climate credentials it continues to try and control introduced predator (rats, possums) numbers by raining cruel 1080 poison down into the environment, which, in this writers opinion, is the very opposite of greenness.

Instead of virtue signaling at the UN the Govt could instead choose to invest the money in finding alternatives to 1080 poisoning to control  the very real world problem of dealing with the human introduced predators that threaten the survival of iconic native bird species (Kiwi) (Kea) that have evolved in NZ’s beautiful subtropical rainforests and mountains.

One of the innovations that has come from the limited funding of Predator free 2050 are high tech traps that automatically reset and rebait themselves while sending info back to a central database to be analyzed.

Death from 1080 poisoning is long, painful and indiscriminate, there is a lot of collateral damage to non targeted species.

Death from these modern traps is fast, targeted and as much as possible, free of pain.

To the best of my knowledge NZ is a world leader in developing high tech trapping of small predators and it may soon become a valuable technology that can be sold to others, a potentially far more tangible, humane and greener use of the country’s resources than the momentary thrill of announcing the sacrifices made for puny CO2 reductions at the next UN climate conference.

A billion dollars thrown at trying to show the world the way on global warming (CO2 neutral 2050)?

It would be nice to have that choice at the ballot box.