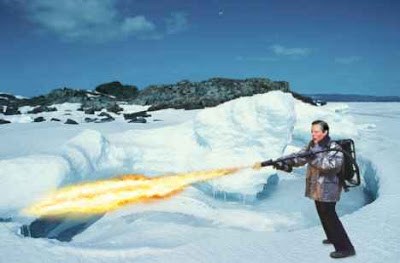 For those who haven’t seen it, here’s a link to US weatherman John Coleman’s magisterial demolition of the Great AGW Scam. I particularly recommend part 4 because that’s the one with all the meat. It shows how temperature readings have been manipulated at the two key climate data centres in the United States – the NASA Goddard Science and Space Institute at Columbia University in New York and the NOAA National Climate Data Center in Ashville, North Carolina. (Hat tip: Platosays) This is a scandal to rank with Climategate. What it shows is that, just like in Britain at the Climatic Research Unit (CRU) temperature data records have been grotesquely distorted by activist scientists in order to exaggerate the appearance of late 20th century global warming. They achieved this – with an insouciant disregard for scientific integrity which quite beggars belief – through the simple expedient of ignoring most of those weather station sited in higher, colder places and using mainly ones in warmer spots. Then, they averaged out the temperature readings given by the warmer stations to give a global average. Et voila: exactly the scary “climate change” they needed to persuade bodies like the IPCC that AGW was a clear and present danger requiring urgent pan-governmental action. The man who spotted all this is a computer programmer called EM Smith – aka the Chiefio. You can read the full report at his excellent blog. In the 70s, the Chiefio discovered, GISS and NOAA took their temperature data from 6,000 weather stations around the world. By 1990, though, this figure had mysteriously dropped to 1500. Even more mysteriously this 75 per cent reduction in the number of stations used had a clear bias against those at higher latitudes and elevations. Here’s an excellent example of this: Bolivia.

Notice that nice rosy red over the top of Bolivia? Bolivia is that country near, but not on, the coast just about half way up the Pacific Ocean side. It has a patch of high cold Andes Mountains where most of the population live.

One Small Problem with the anomally map. There has not been any thermometer data for Bolivia in GHCN since 1990. None. Nada. Zip. Zilch. Nothing. Empty Set. So just how can it be so Hot Hot Hot! in Bolivia if there is NO data from the last 20 years? Easy. GIStemp “makes it up” from “nearby” thermometers up to 1200 km away. So what is within 1200 km of Bolivia? The beaches of Chili, Peru and the Amazon Jungle. Not exactly the same as snow capped peaks and high cold desert, but hey, you gotta make do with what you have, you know?

Meteorologist Joseph D’Aleo has also been on the case. You can find a link to his superb analysis of the scandal at Watts Up With That. (Sorry: I would give you a more direct link to his pdf file but I can’t work out how to do it)

In Canada the number of stations dropped from 600 to 35 in 2009. The percentage of stations in the lower elevations (below 300 feet) tripled and those at higher elevations above 3000 feet were reduced in half. Canada’s semi-permanent depicted warmth comes from interpolating from more southerly locations to fill northerly vacant grid boxes, even as a pure average of the available stations shows a COOLING. Just 1 thermometer remains for everything north of latitude 65N – that station is Eureka. Eureka according to Wikipedia has been described as “The Garden Spot of the Arctic” .

You know what this means, don’t you? It means the ragbag of eco-loons, politicians and technocrats pushing AGW can no longer plausibly deploy their main excuse about Climategate – that it was all a little local difficulty of no great importance because the HadCrut temperature data sets were independently confirmed by those at GISS and NOAA. What this story demonstrates, as many of us suspected all along, is that not just the British temperature records but those in the US too have been hijacked by political activists. I need hardly say that this breaking scandal has been almost completely ignored by the MSM. Not unpredictably, the director of one of the two institutions implicated in this – Dr James Hansen of the Goddard Institute for Space Studies – has issued a (very carefully worded – which makes you wonder what he’s not telling us) denial of any skullduggery.

“NASA has not been involved in any manipulation of climate data used in the annual GISS global temperature analysis.”

The idea that a man of Dr Hansen’s radical persuasion should be running an organisation as important as GISS is looking increasingly absurd. To get an idea how absurd, think Tony Benn in charge of Britain’s defence policy, or – let’s get really weird – imagine if Ed Balls were in charge of Education or Gordon Brown were running the country. More on Hansen’s activist sympathies in another blog.Source by James Delingpole

2 thoughts on “Climategate goes American: NOAA, GISS and the mystery of the vanishing weather stations”