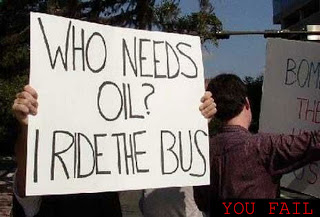 Companies: After an all-out war on oil companies from the left in recent years, it bodes well for the future to see Big Oil now recognizing the attack it’s under and its duty to fight back. Witness Chevron and Exxon Mobil.
Shareholder meetings can be pro forma affairs, but not for major oil companies, which have become a lightning rod for the anti-corporate sentiment gaining traction in U.S. political life since around 2006. Wednesday, Chevron was descended upon by a zoo-full of San Francisco leftists pushing rain forest sentimentalism, Burma, and other pet causes dear to the no-soap crowd. They journeyed all the way to San Ramon, Calif. to shout “Shame on you!” and “No blood for oil” and worse yet to make demands on the company. Among them, a vociferous crew calling on Chevron to settle quickly with an Ecuadorean activist group with a guerrilla-like name: El Frente de Defensa de la Amazonia. El Frente has a $27 billion pollution lawsuit against Chevron. Its case is worthless. Chevron hasn’t operated in Ecuador since 1992 and got a clean bill of health from Ecuador in 1998. Any pollution now is a product of Ecuador’s mismanaged state oil company. But that hasn’t stopped the formidable publicity machine that’s roped in the gullible media covering this case. The new demand, echoed in the press, is for Chevron to “settle” with El Frente. Meanwhile, over at Exxon Mobil, the issue is why the company can’t go “green.” Another throng of activists tried to coax the company into scrapping its global leadership in oil production and instead to turn itself into genteel green farmers, tending corn and sugar and switchgrass in the name of biofuels. But in both cases, something happened this time at the corporate meetings: The companies sharply rebuked these nonbusiness interests. It was a dramatic shift from the polite courtesies and kowtowings they’ve extended to these radicals in the past. This time, they actually stood up for themselves and what they do. Chevron’s CEO bluntly told the radicals from “True Cost Of Chevron” that their waved-around propaganda “report” on the oil giant is so shoddy and false it actually “deserves the trash can.” Exxon Mobil’s Chairman and CEO informed other radicals that oil and gas will continue to be dominant fuels, meeting some two-thirds of global energy needs until at least 2030. As such, it makes no sense whatever for Exxon to go into some other industry. Better still, the shareholders of these companies smacked down every resolution designed to make the crazies feel good and the value of the companies go down. Maybe that’s because these moves look like shakedowns in search of a payday. Chevron’s being sued by a registered nongovernment organization (NGO) in Ecuador, so its financing is a black box. Its lawsuit is reportedly paid for by trial lawyers in Philadelphia, a group not exactly known for respecting shareholder value. But who knows? Exxon is beset by several groups that at least one shareholder thinks are tied to unions and activists: “Resolutions to do things like . . . pursue renewables are really just attempts by environmentalists and unions to gain control of the company to advance various public-policy goals,” Steven Milloy, managing partner at Action Fund Management, told Bloomberg News. “At the top of that list is climate change.” Milloy should know: He’s also publisher of the popular JunkScience.com Web site. The real aim of all these attacks is to end these companies’ world leadership in oil extraction. The green groups want to put an end to what the oil companies do best, from finding oil in the world’s most hostile climates like the Arctic Sea, to extracting oil from abandoned wells, to drilling oil 12 miles through salt walls under the sea. The ultimate goal is less oil to power American industry and to maintain the quality of private life. It looks like a new era is upon us. The push-back to defend our way of life has begun.
Source

One thought on “Big Oil Fights Back! (Finally)”