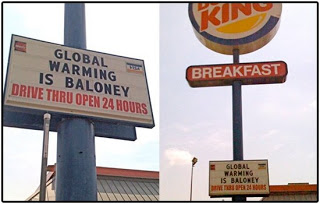 This is awesome! Even a big international corporation is now standing up against the global warming fraud and isn’t afraid to take a controversial public position. Leo Hickman from The Gaurdian Newspaper had the following to say:

A row between the fast food giant Burger King and one of its major franchise owners has erupted over roadside signs proclaiming “global warming is baloney”.

The franchisee, a Memphis-based company called the Mirabile Investment Corporation (MIC) that owns more than 40 Burger Kings across Tennessee, Arkansas and Mississippi, has described Burger King as acting “kinda like cockroaches” over the controversy. MIC says it does not believe Burger King has the authority to make it take the signs down. The dispute began to sizzle last week, when a local newspaper reporter in Memphis, Tennessee, noticed the signs outside two restaurants in the city and contacted the corporation to establish if the message represented its official viewpoint. Burger King’s headquarters in Miami said it did not, adding that it had ordered MIC to take the signs down. But a few days later readers of the Memphis paper said they had seen about a dozen Burger King restaurants across the state displaying the signs and that some had yet to be taken down. Media attempts to contact MIC to establish why it was taking an apparently defiant stance were rebuffed, but the Guardian managed to grill MIC’s marketing president, John McNelis.

“I would think [Burger King] would run from any form of controversy kinda like cockroaches when the lights get turned on,” said Mr McNelis. “I’m not aware of any direction that they gave the franchisee and I don’t think they have the authority to do it.”

McNelis added: “The [restaurant] management team can put the message up there if they want to. It is private property and here in the US we do have some rights. Notwithstanding a franchise agreement, I could load a Brinks vehicle with [rights] I’ve got so many of them. By the time the Burger King lawyers work out how to make that stick we’d be in the year 2020.”

He continued: “Burger King can bluster all they want about what they can tell the franchisee to do, but we have free-speech rights in this country so I don’t think there’s any concerns.”

The Guardian sent a transcript of the interview to Susan Robison, Burger King’s vice-president of corporate communications.

She responded: “The statement that was posted on several restaurants’ reader boards in the Memphis area, and the view expressed by the franchisee on this issue does not reflect Burger King Corp’s opinion … BKC has guidelines for signage used by franchisees [which] were not followed. We have asked the franchisee to remove the signage and have been told that the franchisee will comply.”

At one point, a Burger King employee confirmed that the language on the sign was in fact the view represented by Burger King International.

We at ilovecarbondioxide.com fully support this grassroots campaign by these Burger King franchisees and highly encourage you to support the chain and its efforts in this matter.