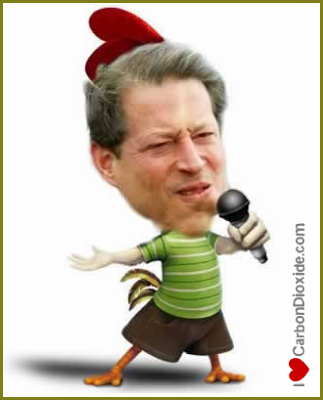 By James A. Peden

Chicken little was walking around one day when an acorn fell from a tree and struck him on the head. Having but a chicken-sized brain, and further having failed all courses related to the sky when he was in barnyard school, he immediately assumed the sky was falling. He quickly produced an extensive documentary, An Inconvenient Falling Sky.

Hollywood loved his documentary, and awarded him an Oscar. Then the United Nations adopted his falling sky charts and made it official: the sky is indeed falling, and it’s all the fault of the chickens. Shortly thereafter he was awarded a Nobel Peace Prize for alerting the barnyard of the coming disaster. Computer models at NASA determined that the cause of the falling sky was definitely chicken shit. The barnyard government quickly took steps to impose a huge tax on chicken shit, with the biggest chickens obviously paying the most. The money would be given to chickens who were constipated and thus didn’t produce much chicken shit. A goal was set to induce widespread constipation in the barnyard in order to save the planet from the falling sky. Chicken Little realized there was a lot of money to be made out of all this, and formed a corporation to deal in constipation credits. The barnyard government passed a trillion dollar Cap and Trade bill which required all shitting chickens to purchase constipation offsets from Chicken Little.

Everything went smoothly for a while. But as constipation became widespread, and the chicken shit diminished, the hens stopped laying. The farmer finally sold his entire flock to Kentucky Friend Chicken and everyone in the barnyard lived happily ever after ( except, of course, the chickens, who didn’t live past the following Thursday. )

—
Make your voice heard! Submit your letter, article, or story to info [at] ilovecarbondioxide.com

One thought on “Chicken Little, Revised”