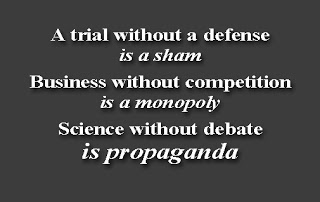 The scientific process has become distorted. One side of a theory receives billions, but the other side is so poorly funded that auditing of that research is left as a community service project for people with expert skills, a thick skin and a passionate interest. A kind of “Adopt an Error” approach. Can science survive the vice-like grip of politics and finance? Despite the billions of dollars in funding, outrageous mistakes have been made. One howler in particular, rewrote history and then persisted for years before one dedicated fact checker, working for free, exposed the fraud about the Hockey Stick Graph. Meanwhile agencies like the Goddard Institute of Space Studies, can’t afford to install temperature sensors to meet its own guidelines, because the workers are poorly trained and equipped to dig trenches only with garden trowels and shovels. NOAA “adjust” the data after the fact—apparently to compensate for sensors which are too close to air conditioners or car parks, yet it begs the question: If the climate is the biggest problem we face; if billions of dollars are needed, why can’t we install thermometers properly?

How serious are they about getting the data right? Or are they only serious about getting the “right” data? The real total of vested interests in climate-change science is far larger than just scientists doing pure research. The $30 billion in funding to the CCSP (graphed above) does not include work on green technologies like improving solar cells, or storing a harmless gas underground. Funding for climate technologies literally doubles the amount of money involved, and provides a much larger pool of respectable-looking people with impressive scientific cachet to issue more press releases—most of which have little to do with basic atmospheric physics, but almost all of which repeat the assumption that the climate will warm due to human emissions. In other words: a 30-billion-dollar cheer squad.

The scientists funded by governments don’t need to be dishonest for science to become distorted. They just need to do their jobs. If we ask 100 people to look for lizards in the jungle, would anyone be surprised if no one sees the elephant on the plain? Few people are paid or rewarded for auditing the IPCC and associated organizations. Where is the Department of Solar Influence or the Institute of Natural Climate Change?

Thousands of scientists have been funded to find a connection between human carbon emissions and the climate. Hardly any have been funded to find the opposite. Throw 30 billion dollars at one question and how could bright, dedicated people not find 800 pages worth of connections, links, predictions, projections and scenarios? (What’s amazing is what they haven’t found: empirical evidence.)

And scientists are human, they have mortgages and kids. If Exxon money has any pulling power, government money must also “pull”. I can’t say it better than Al Gore in An Inconvenient Truth: It is difficult to get a man to understand something when his salary depends upon his not understanding it. – Upton Sinclair, 1935 Ironically it was Al Gore himself who helped ensure there was copious funding for the U.S. Global Change Research Program (USGCRP) from 1993-2000. We’ve poured billions into focusing bright brains on one angle, one topic, one cause. That’s a lot of salaries.

There doesn’t necessarily need to be a conspiracy. It doesn’t require any centrally coordinated deceit or covert instructions to operate. Instead it’s the lack of funding for the alternatives that leaves a vacuum and creates a systemic failure. The force of monopolistic funding works like a ratchet mechanism on science. Results can move in both directions, but the funding means that only results from one side of the equation get “traction.”
Ideas that question the role of carbon in the climate are attacked with a fine-tooth comb by large teams of paid researchers. If real flaws are found they are announced loudly and repeatedly, and if there are imagined or irrelevant flaws, these too are announced and sometimes with even more fanfare. But ideas that support the role of carbon in the climate are subject to a very different analysis. Those on Team-AGW check to see if they have underestimated the impact of carbon, or made an error so obvious it would embarrass “the Team.” Since there are few paid supporters of natural causes, or people who benefit from defending non-carbon impacts, there is no one with an a priori motive to dig deep for non-obvious mistakes. So the pro-AGW ideas may only be scrutinized briefly, and by unpaid retirees, bloggers running on donations, or government scientists working in other fields—like geologists, who have reason to be skeptical, but who are not necessarily trained in, say, atmospheric physics.

There doesn’t necessarily need to be a conspiracy. It doesn’t require any centrally coordinated deceit or covert instructions to operate. Instead it’s the lack of funding for the alternatives that leaves a vacuum and creates a systemic failure.

Normally this might not be such a problem, because the lure of fame and fortune by categorically “busting” a well-accepted idea would attract some people. In most scientific fields, if someone debunks a big Nature or Science paper, they are suddenly cited more often; are the next in line for a promotion and find it easier to get grants. They attract better PhD students to help, are invited to speak at more conferences, and placed higher in the program. Instead in climate science, the reward is the notoriety of a personal attack page on Desmog1, ExxonSecrets2 or Sourcewatch3, dedicated to listing every mistake on any topic you may have made, any connection you may have had with the fossil fuel industry, no matter how long ago or how tenuous. The attack-dog sites will also attack your religious beliefs if you have any. Roy Spencer, for example, has been repeatedly attacked for being Christian (though no one has yet come up with any reason why that could affect his satellite data). Ironically, the “activist” websites use paid bloggers. DeSmog is a funded wing of a professional PR group Hoggan4 and Associates (who are paid to promote clients5 like David Suzuki Foundation, ethical funds, and companies that sell alternative energy sources like hydro power, hydrogen and fuel cells.) ExxonSecrets is funded by Greenpeace6 (who live off donations to “save” the planet, and presumably do better when the planet appears to need saving). Most scientific fields are looking for answers, not looking to prove only one side of a hypothesis. There are a few researchers who are paid to disprove the hypothesis of Global Warming, and most of them are investigated and pilloried as if they were a politician running for office. This is not how science works, by ad hominem attack. The intimidation, disrespect and ostracism leveled at people who ask awkward questions acts like a form of censorship. Not many fields of science have dedicated smear sites for scientists. Money talks. Respected MIT climatologist Richard Lindzen7 has spoken out against the pressure to conform and laments the loss of good researchers:

Sadly, this is only the tip of a non-melting iceberg. In Europe, Henk Tennekes was dismissed as research director of the Royal Dutch Meteorological Society after questioning the scientific underpinnings of global warming. Aksel Winn-Nielsen, former director of the U.N.’s World Meteorological Organization, was tarred by Bert Bolin, first head of the IPCC, as a tool of the coal industry for questioning climate alarmism. Respected Italian professors Alfonso Sutera and Antonio Speranza disappeared from the debate in 1991, apparently losing climate-research funding for raising questions.

The combination of no financial reward, plus guaranteed hostile scrutiny, and threats of losing employment would be enough to discourage many from entering the contentious side of the field or speaking their mind if they question the “faith.” Finally, volunteers and isolated researchers lack infrastructure. Even though the mainstream theory is exposed to some verification, most scientists who find flaws don’t have paid teams of public relations experts to issue multiple press releases or funding to put in the hours and months required to submit papers. So when a mistake is found, few people may hear about it outside the industry. The monopolistic funding ratchet ensures that even insignificant or flawed analysis of factors that drive the climate can be supported longer than they should be, while real problems are belittled, ignored, and delayed. In a field as new as climate science, many things can change over ten years. Progress in understanding the planetary climate has slowed to a crawl.

Where is the motivation to prove AGW is wrong?

How many experts would go out of their way to make their own expertise and training less relevant? With funding hinged on proving that carbon controls the climate and therefore that climate science itself is critically important, it’s a self-sanctioning circle of vested interests. Yes, smart climate scientists are employable in other fields. But if voters suddenly realized carbon emissions had a minor role and humans have little influence, thousands of people would have to change something about their employment, and change is painful. In any industry, it’s impossible to argue that the specialists would prefer to have half the funding and half the status. Most of them either won’t get the next pay-rise, could lose their employment, or at least some spending power. They don’t get the upgrade of equipment they want, or they just lose status, because, well, climatology is “important”, but if we can’t change the weather, we are not inviting said experts onto our committees and to as many conferences.

We can assume most scientists are honest and hardworking, but even so, who’s kidding that they would all spend as much time and effort looking to disprove AGW as they do to prove it?

We can assume most scientists are honest and hardworking, but even so, who’s kidding that they would all spend as much time and effort looking to disprove AGW as they do to prove it? If your reputation and funding are on the line, you sweat, struggle and stay up late at night to figure out why you’re right and they’re wrong. Competition brings out the best in both sides. Some claim that they trust the scientific process itself, and the right answers will prevail in the long run—which is probably true. But as John Maynard Keynes famously said: “In the long run we are all dead.” There are better ways than waiting for the post-mortem. Science delayed is science denied. Science slowed is propaganda perpetuated.