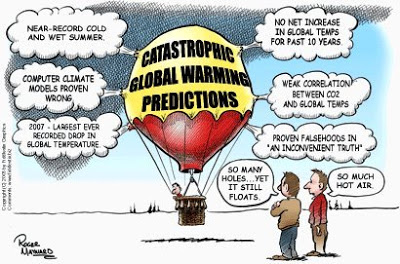 The coldest winter in a decade in many places, with snow in unlikely cities such as New Orleans, has deflated some of the hot air in global warming. And a heavy snowfall that paralyzed Washington, D.C., upstaged a mass demonstration scheduled to promote global warming.

Nevertheless, according to Al Gore and the mainstream media, “the debate is over” proving that global warming exists, that humans are causing it and that “science is settled.”

But 680 of the world’s leading scientists, economists and policy analysts, who met March 8-10 in New York City for the second Heartland International Conference, beg to differ. The title of the conference expressed their doubts: “Global Warming: Was It Ever Really a Crisis?”

These authorities assert that scientists worldwide do not agree that global warming is human induced (in scientific lingo, anthropogenic). They do not even agree that the Earth is still warming.

Many scientists and other observers have come to realize that global warming is no longer a question of science but is all about politics and money. Their slogan, cap-and-trade, was best explained by House Minority Leader John A. Boehner, R-Ohio, as “a carbon tax that will increase taxes on all Americans who drive a car, who have a job, who turn on a light switch.”

President Obama is being pressured by James McCarthy, head of the American Association for the Advancement of Science, to rush his carbon tax through Congress before the American people discover the lie in Obama’s promise that “95 percent of working families” will not see their taxes rise by “a single dime.” In fact, his own budget shows that taxes will rise for 100 percent of Americans for the sake of global warming.

The United Nations Intergovernmental Panel on Climate Change plans to use a treaty to reduce America’s use of energy and therefore our standard of living, while forcing us to subsidize energy production in other countries and close our eyes to the omission of China and India from any obligation.

There has been virtually no overall global warming since 2001. Christopher Monckton, a former adviser to Margaret Thatcher, reminded the conference that temperatures “have been plummeting at a rate equivalent to 11 Fahrenheit degrees per century throughout the four years since Gore launched his mawkish, sci-fi comedy horror B-movie.”

Eagle Forum’s observer at the Heartland Conference, Pat Carlson of Dallas, reported that its most interesting speaker was Czech Republic President and rotating President of the European Union Vaclav Klaus, who has taken a bold position against the prevailing propaganda about global warming. He described talking to global warming advocates as similar to trying to make “well prepared arguments” using “relevant data” to former East European Communist bureaucrats: “It all fell into emptiness … they did not listen … they did not argue back … they considered you uninformed … a complainer.”

Klaus has written a book called “Blue Planet in Green Shackles — What is Endangered: Climate or Freedom?” He had previously carried his politically incorrect views to the World Economic Forum in Davos, where he reminded the countries promoting the global warming agenda that they “had not fulfilled even the relatively modest Kyoto Protocol obligations.”

As a resident of St. Louis, which boasts a world-class zoo noted especially for its bears housed in their natural habitats, I’ve been concerned because of the many television spots warning that global warming may make polar bears extinct. I can now stop worrying; the Senate’s expert on global warming, James Inhofe, R-Okla., has discovered that polar bears are actually more plentiful than they were 40 years ago.

This was confirmed at the Heartland Conference by Ph.D. polar bear biologist Dr. Mitchell Taylor. He said polar bears are definitely not disappearing; their numbers are holding steady at about 24,000.

At the Heartland Conference, the science of global warming was actually discussed and debated. That was very different from the United Nations conferences Carlson previously attended, where global warming caused by humans was accepted as fact without debate.

The advocates of a U.N. treaty to force the United States to reduce our use of energy are extraordinarily shy about debating the science of the issue. We’ve yet to hear any of them explain or apologize for their hysterical support of the false assumption of the 1960s that millions of people would starve to death in the 1980s because of overpopulation, or of the 1970s theory that global cooling would kill our agriculture.

Christopher Horner’s new book, called “Red Hot Lies: How Global Warming Alarmists Use Threats, Fraud and Deception to Keep You Misinformed,” gives many, many examples of how they not only refuse to debate, but are malicious against anyone who dares to contradict their view.