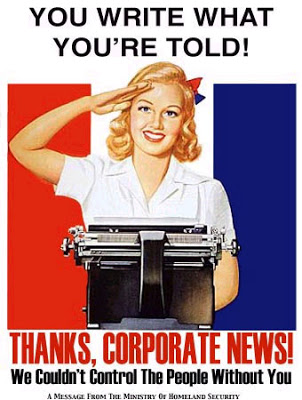 Every month for well over twenty-five years I have received a copy of the “Quill”, a magazine by and for the members of the Society of Professional Journalists.

The April issue had only in-house SPJ advertisements; none by any vendors. And it was a very slim edition, some 35 pages devoted to things like the SPJ president’s message, an analysis of the coverage of the presidential campaign that exonerated journalists of any bias, and “Examples of Ethical Excellence.”

Back in December I penned a commentary titled, “Cheerful Thoughts at the Funeral” that took issue with comments by Dave Aeikens, the SPJ president and God knows I am not picking on him, but the opening line in his April message was, “If anything will keep the demand for news strong, it will be journalist’s ability to produce reliable, timely and accurate information while using proven ethical standards.”

When nearly half of those polled say that global warming is the very last topic on their mind these days newspapers are still full of references to a climate event that is just not happening. The Earth has been cooling since 1998. The Sun for nearly two years is virtually without any sunspots—magnetic storms—and the real news is that the Earth is truly threatened by two outcomes of this, both of which could result in the deaths of millions through starvation as increasing cold weather deters crop growth.

Aeikens knows that newspaper circulation is shrinking and web site audiences are growing and he says so. The Society’s answer, however, is a series of town hall meetings to ask people why they no longer trust the local fish-wrap. This is just a complete waste of time. This is a willing blindness to the bias and poor reporting that have come to typify the mainstream press.

Let me take a shot at what the problem is. Could it have something to do with the appalling school girl crush that the mainstream media had on a certain Barack Hussein Obama and has now extended to his wife? Could the public resent having been convinced to vote for someone who is tripling the nation’s deficit, planning new taxes, and is so tied to a teleprompter that it’s already a joke?

Could the public be sick of endless articles on how to be “Green” or why they are to blame for not adding thousands of dollars of solar panels to the roofs of their homes? Or choose to drive traditional automobiles rather than hybrids? Or articles declaring that the primary sources of energy in America, coal, oil and natural gas, are “dirty” and the cause of a “global warming” that is not happening?

Could the public be angered to have been blindsided by a financial crisis that experts had been warning about for years, but whom the press largely ignored?

The thickest section of the daily I receive is the sports section and I never read the sports section. What is left is mostly wire service stories by the horridly biased Associated Press and some comparably silly stuff by Reuters. Everything else is feature news fluff.

My subscription runs out in mid-April. Since I get my news—and plenty of it—off of the Net, I have no need for my daily newspaper.

The SPJ is asking what their members did wrong or should try to get right. Maybe that’s what they keep asking each other in the newsrooms of the major networks and in CNN and MSNBC whose ratings are in the tank while Fox News rolls merrily along providing news that strives to be “fair and balanced.”

Fair and balanced. What a concept!