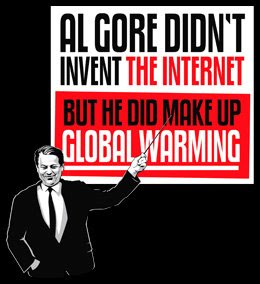 You are probably wondering whether President-elect Obama owes the world an apology for his actions regarding global warming. The answer is, not yet. There is one person, however, who does. You have probably guessed his name: Al Gore. Mr. Gore has stated, regarding climate change, that “the science is in.” Well, he is absolutely right about that, except for one tiny thing. It is the biggest whopper ever sold to the public in the history of humankind.

What is wrong with the statement? A brief list: 1. First, the expression “climate change” itself is a redundancy, and contains a lie. Climate has always changed, and always will. There has been no stable period of climate during the Holocene, our own climatic era, which began with the end of the last ice age 12,000 years ago. During the Holocene there have been numerous sub-periods with dramatically varied climate, such as the warm Holocene Optimum (7,000 B.C. to 3,000 B.C., during which humanity began to flourish, and advance technologically), the warm Roman Optimum (200 B.C. to 400 A.D., a time of abundant crops that promoted the empire), the cold Dark Ages (400 A.D. to 900 A.D., during which the Nile River froze, major cities were abandoned, the Roman Empire fell apart, and pestilence and famine were widespread), the Medieval Warm Period (900 A.D. to 1300 A.D., during which agriculture flourished, wealth increased, and dozens of lavish examples of Gothic architecture were created), the Little Ice Age (1300 to 1850, during much of which plague, crop failures, witch burnings, food riots — and even revolutions, including the French Revolution — were the rule of thumb), followed by our own time of relative warmth (1850 to present, during which population has increased, technology and medical advances have been astonishing, and agriculture has flourished). So, no one needs to say the words “climate” and “change” in the same breath — it is assumed, by anyone with any level of knowledge, that climate changes. That is the redundancy to which I alluded. The lie is the suggestion that climate has ever been stable. Mr. Gore has used a famously inaccurate graph, known as the “Mann Hockey Stick,” created by the scientist Michael Mann, showing that the modern rise in temperatures is unprecedented, and that the dramatic changes in climate just described did not take place. They did. One last thought on the expression “climate change”: It is a retreat from the earlier expression used by alarmists, “manmade global warming,” which was more easily debunked. There are people in Mr. Gore’s camp who now use instances of cold temperatures to prove the existence of “climate change,” which is absurd, obscene, even. 2. Mr. Gore has gone so far to discourage debate on climate as to refer to those who question his simplistic view of the atmosphere as “flat-Earthers.” This, too, is right on target, except for one tiny detail. It is exactly the opposite of the truth.