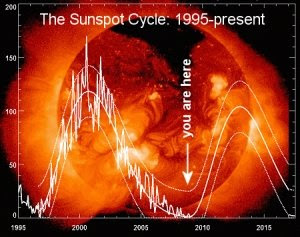 By Watts Up With That?

The sunspot cycle is behaving a little like the stock market. Just when you think it has hit bottom, it goes even lower. 2008 was a bear. There were no sunspots observed on 266 of the year’s 366 days (73%). To find a year with more blank suns, you have to go all the way back to 1913, which had 311 spotless days: plot. Prompted by these numbers, some observers suggested that the solar cycle had hit bottom in 2008. Maybe not. Sunspot counts for 2009 have dropped even lower. As of March 31st, there were no sunspots on 78 of the year’s 90 days (87%). It adds up to one inescapable conclusion: “We’re experiencing a very deep solar minimum,” says solar physicist Dean Pesnell of the Goddard Space Flight Center.

“This is the quietest sun we’ve seen in almost a century,” agrees sunspot expert David Hathaway of the Marshall Space Flight Center.