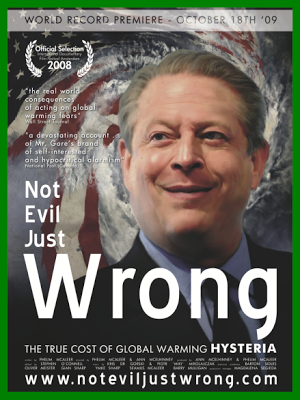 The film Not Evil Just Wrong is far too politically incorrect to be feted in Hollywood or the politicos. This is the last movie they want anybody seeing.

By Peter Foster, National Post
I rish filmmaker Phelim McAleer pulled a Michael Moore at the recent New York “eco-premiere” of the environmental disaster movie The Age of Stupid. The film suggests that flying is one of the worst things you can do to the planet, so Mr. McAleer, microphone in hand, started asking those coming down the recycled green carpet how they’d travelled to the Big Show. Gillian Anderson, of X-Files fame, pronounced, “you know sometimes, sometimes people have to fly to make a stand in order to get peoples’ attention for these issues.” The film’s director, Franny Armstrong, evaded the question and claimed that the film had only generated the emissions of four average Americans over a year. Mr. McAleer persisted and soon found himself hustled outside the green velvet rope, insisting “I only want to ask celebrities difficult questions.”

Mr. McAleer was trying to drum up a little publicity for his own, very different, film, Not Evil Just Wrong, which has its world premiere on October 18. Only it won’t be at the World Financial Center. It will take place in homes, on campuses, and at privately-organized screenings across North America. (You can be part of the event by ordering a package complete with DVD, poster, and swatch of red carpet from www.noteviljustwrong.com.)

Mr. McAleer and his wife Ann McElhinney — who also made Mine Your Own Business, a documentary that fingered anti-development radicals and “the dark side of environmentalism” — have inevitably not attracted the kind of attention lavished on The Age of Stupid, which features a lone archivist looking back from a devastated world in the year 2055 and wondering how we could have allowed it all to go so terribly, terribly wrong.

It is surely worth noting that those who claim that there is “consensus” on global warming science being “settled” seem to imagine that this gives them licence to then compete with each other in producing eco-porn that goes far beyond anything in the very worst scenarios peddled by the UN’s Intergovernmental Panel on Climate Change. Shouldn’t warmists stick to the script before they roll the carbon credits?

Not Evil Just Wrong in fact has a field day with apocalyptic science, particularly that peddled by Al Gore and his pet boffins. NASA’s James Hansen almost convulses onscreen at the mention of Canadian independent researcher Stephen McIntyre, the man who broke the IPCC’s iconic “hockey stick” temperature graph, and continues to hold alarmists to the highest standards. Meanwhile another of Mr. Gore’s gurus provides a parallel to Mr. McAleer’s being escorted off Stupid’s green carpet. The Not Evil team went to Stanford University to interview climatologist Stephen Schneider. It was apparently inconceivable to Professor Schneider that anybody in the film community could be anything other than a full warmist, so imagine his surprise when Messrs. McAleer and McElhinney were impolite enough to point out that in the 1970s he had been one of the leading proponents of catastrophic global cooling! Clearly Professor Schneider didn’t want his image attached to any such inconvenient recollections, so Stanford University’s lawyers withdrew permission for any shots of either the good professor or the campus to be shown.

Not Evil Just Wrong is far too politically incorrect to be feted in Hollywood, or welcomed by political elites. This is the last movie that those squabbling down the road to Copenhagen want anybody seeing or thinking about. That’s why it needs maximum exposure on October 18.

What is truly frightening is the slavish adulation that film makers such as Ms. Armstrong receive. While claiming to be “indie” and low-budget, and grassroots “crowd-funded,” Ms. Armstrong has the vast clout of environmental organizations such as Greenpeace and Friends of the Earth behind her, as well as billionaire George Soros’s Moveon.org. The New York premiere was beamed to numerous locations around the world. In Nigeria, the Governor of Lagos was an attendee. In Amsterdam and Copenhagen, membes of the Dutch and Danish Royal Families turned out. The New York premiere was followed by a question and answer session featuring Kofi Annan, former secretary general of the United nations, and Mary Robinson, a former president of Ireland and past head of the UN’s Human Rights Commission.

Stupid meanwhile had already been screened for “the United Nations, Center of American Progress, EPA, The World Bank, the UK Parliament, the European Union, and the Scottish, Welsh, Swedish, Australian and Dutch parliaments.”

The film’s London premiere early this year was attended by a bevy of politicos, including the Labour government’s Environment Minister, Ed Miliband, who was promptly ambushed by the film’s star, Pete Postlethwaite, over new coal plants. Mr. Postlethwaite threatened to hand back his Order of the British Empire if they weren’t stopped! That must have sent a shudder through Buckingham Palace.

Being a bit of calculated masochist, Mr. Miliband then agreed to debate Ms. Armstrong, whereupon she used the occasion to launch a “10 by 10” campaign, to cut carbon emissions by 10% by the end of 2010. Soon not only Mr. Miliband but Prime Minister Gordon Brown and the entire cabinet had signed on, plus the shadow cabinet, along with a raft of major corporations, municipalities, soccer clubs and other publicity seekers.

Messrs McAleer and McElhinney meanwhile have received death threats, been described as “stinking, selfish, sociopathic fascists,” and received wishes that their children be born handicapped. That’s what you get for asking “difficult questions.”
Source