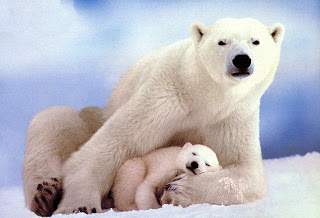 Those who are most passionate about the threat of global warming have recently been up in arms about melting ice in the Arctic and using the cutest pictures of polar bears to illustrate the threat to nature caused by global warming.Never mind that the population of polar bears is growing (from an estimated 5,000 in 1960 to 22,000 today–see below), and we could make it grow even more quickly by, umm, not shooting them. The pictures we see of the polar bears ‘stranded’ on a small ice floe make them look forlorn, but in fact these bears are either surfing–or fishing. Polar bears swim quite nicely, thank you and rest on the occasional floe, or use it as cover while they look for something to eat.From www.ncpa.org) Interestingly, the World Wildlife Fund (WWF), an international organization that has worked for 50 years to protect endangered species, has also written on the threats posed to polar bears from global warming. However, their own research seems to undermine their fears. According to the WWF, about 20 distinct polar bear populations exist, accounting for approximately 22,000 polar bears worldwide. Population patterns do not show a temperature-linked decline:

The status of the remaining six populations (whether they are stable, increasing or decreasing in size) is unknown.But they make a nice poster… or t-shirt.As for the larger issue of melting Arctic ice, it melted quite rapidly for a year or so. It is now coming back. The problem really is that we have only been able to measure Arctic ice for a short period, and climate cycles have outlasted our measurements. But for those who think that melting Arctic ice is something really out of the ordinary, take a look at this. Submarines have been surfacing in polynyas (er, holes in the Arctic ice…) for quite a while. Thanks to Anthony Watt for doing the hard work for this article–and others, as well. Good source for information, and winner of this year’s Science Blog of the Year.