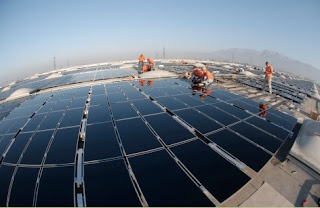 By Viv Forbes, Chairman, The Carbon Sense Coalition
Australian electricity consumers can look forward to soaring charges for electricity and blackouts if state and federal politicians continue to undermine the power grid by mandating and subsidising solar power generation. Solar power can never produce continuous, predictable low cost power. It must always be supported by expensive power storage systems or by reliable power sources such as coal, gas, hydro or nuclear. No matter how many millions of taxpayer money is poured into “research”, it can never solve the two fatal flaws of solar power.

Firstly, sunlight energy arrives in very dilute form, and thus needs vast areas of collectors to harvest significant energy. This results in high capital costs and much environmental disturbance. Solar power can light one 75-watt bulb for every card table of collectors (in the middle of the day only). How many card tables do we need to run the trains, factories, fridges, homes, heaters, hospitals and tools of a big city? Secondly, the solar energy produced during daylight hours is constantly variable and unpredictable, and zero power is generated at night. As a result, solar power farms seldom produce more than an average of 15% of their rated capacity over a year and as low as 1% for a day or so. In Australia, the maximum electricity demand occurs at about 6.30 pm in mid-winter in the big southern cities. The maximum solar power is generated at noon in mid-summer in clear northern deserts. If the nightly solar curfew is to be covered by solar power alone, this necessitates a vast area of collectors to provide grid power as well as charge a storage backup during the day and run it down at night. The scattered solar collectors also need a huge new transmission network. Such a system is inefficient and very costly. More likely, however, is that the solar farms will be backed up by gas or coal power stations running on idle and wasting fuel and capital until they are needed to supply power during the nightly solar blackouts. Solar energy has useful applications, but supplying the power grid is NOT one of them. Solar power can never supply the reliable low cost electricity needed for Australian cities and industries. In that application, it can only exist as a subsidised and troublesome appendage propped up by serious power sources such as coal, gas, nuclear or hydro. For a detailed look at Solar Power Realities, with actual performance figures see:
http://carbon-sense.com/2009/07/04/solar-realities/ And some home solar economics:
http://carbon-sense.com/2009/06/06/solar-energy-costs-economics/ PDF version of this statement here.