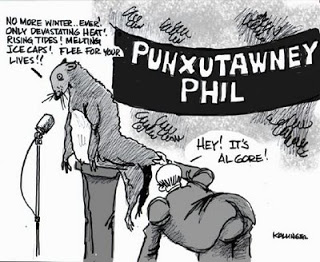 He did this most recently on January 28 in front of a Senate Foreign Relations Committee chaired by John Kerry. As usual, he did so in the midst of a winter storm that dumped inches of snow on Washington, D.C. and coated the streets with ice. This has actually become known as “the Gore effect.”

Gore reminds me of a character created by the Li’l Abner cartoonist, Al Capp. “Joe Btfsplk” was a walking jinx. He walked around with a perpetual dark rain cloud over his head and every time he showed up anywhere, bad luck would happen to anyone in the vicinity.

The ability to hold two totally opposite thoughts in one’s head, a winter storm and imminent destruction by sizzling hot weather, is a kind of schizophrenia or just plain stupidity. In Gore’s case, it has a lot more with lining his pockets with millions of dollars in the sale of “carbon credits” purchased to continue emitting carbon dioxide, the gas that Gore insists will destroy the world.

Carbon dioxide is the gas on which all plant life on Earth depends for growth. Without CO2 every single piece of vegetation dies and we die with it because a lot of critters we eat are herbivores. Happily, humans exhale about two pounds of CO2 every day. Burning anything, including calories, produces CO2. Even if there is more CO2, it has little to do with climate change.

Which begs the question why President Obama and the U.S. Congress wants to pass laws requiring cars to emit less CO2 and other laws to impose a cap-and-trade or carbon tax on anything that produces CO2. This is nothing less than pure thievery.

The other question, of course, is what global warming or climate change has to do with foreign relations? Since we cannot do a thing about the climate which, by the way, has been cooling since 1998, why is a Senate committee not only listening to Al Gore bloviating about it, but falling all over themselves to lavish praise upon this bulbous charlatan?

This is particularly true in light of the way Americans now rank the environment dead last on a list of priorities to which the government should attend. That’s not going to happen because President Obama is a Green zealot and, as more Americans gain awareness of this, there is likely to be a backlash.

This is the first Groundhog day President Obama is in office. He has at least three more to go and, who knows, after that he may be unemployed again like a lot of Americans recovering from Obamamania.