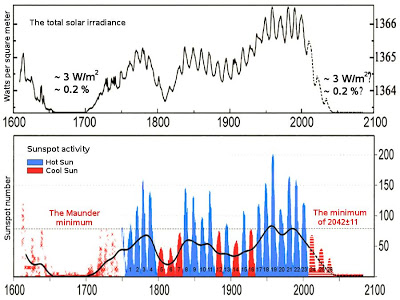 The following is excerpted from a PDF document titled “The Sun Defines the Climate” by Russian academician Habibullo Abdussamatov. (see here or here for more discussion) The document describes one means by which solar variability drives Earth’s (and Mars’) climate, in conjunction with the ocean cycles and the water cycle. The reason for the far less important influence of CO2 on the climate is explained.

Over the past decade, global temperature on the Earth has not increased; global warming has ceased, and already there are signs of the future deep temperature drop (Fig. 7, 11). Meantime the concentration of carbon dioxide in the atmosphere over these years has grown by more than 4%, and in 2006 many meteorologists predicted that 2007 would be the hottest of the last decade. This did not occur, although the global temperature of the Earth would have increased at least 0.1 degree if it depended on the concentration of carbon dioxide. It follows that warming had a natural origin, the contribution of CO2 to it was insignificant, anthropogenic increase in the concentration of carbon dioxide does not serve as an explanation for it, and in the foreseeable future CO2 will not be able to cause catastrophic warming. The so-called greenhouse effect will not avert the onset of the next deep temperature drop, the 19th in the last 7500 years, which without fail follows after natural warming.

The earth is no longer threatened by the catastrophic global warming forecast by some scientists; warming passed its peak in 1998-2005, while the value of the TSI by July – September of last year had already declined by 0.47 W/m2 (Fig. 1).
For several years until the beginning in 2013 of a steady temperature drop, in a phase of instability, temperature will oscillate around the maximum that has been reached, without further substantial rise. Changes in climatic conditions will occur unevenly, depending on latitude. A temperature decrease in the smallest degree would affect the equatorial regions and strongly influence the temperate climate zones. The changes will have very serious consequences, and it is necessary to begin preparations even now, since there is practically no time in reserve. The global temperature of the Earth has begun its decrease without limitations on the volume of greenhouse gas emissions by industrially developed countries; therefore the implementation of the Kyoto protocol aimed to rescue the planet from the greenhouse effect should be put off at least 150 years.

One thought on “The Sun Defines the Climate”