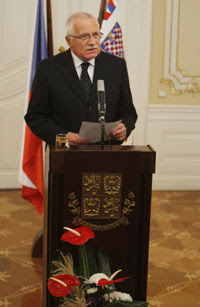 Despite huge spending, it has not been proved that the human effect on the climate is significant

By Václav Klaus M any thanks for the invitation and for the courage to organize such an important gathering in the moment when political correctness tells you not to do it.

We are meeting one month before the Climate Change Copenhagen Summit and several weeks before the U.S. Senate hearing regarding the cap-and-trade scheme. For these reasons, today’s meeting can’t be an academic conference, even though the topic still needs academic discussion. There is no consensus — neither in science, nor in economic analysis or politics.

I have already been at a UN Summit in Copenhagen before. It was in 1995 at the so-called Social Summit. At that time, the Summit was attended by then U.S. Vice President Al Gore who — so it seems — will be there again this year. I did also attend, as Prime Minister of the Czech Republic, but I don’t plan to go there now. I don’t see any chance to influence the results or to be listened to.

In 1995, there were huge demonstrations organized by all kinds of anti-establishment groupings – from socialists and greens to anarchists and anti-globalizationists. I have never seen such clashes between demonstrators and police and army forces before. The difference is that I don’t expect any demonstrations in Copenhagen now. The anti-establishment people have in the meantime become insiders and will be sitting in the main hall. This is a shift with far-reaching consequences.

My views on the doctrine of global warming and especially on the role of man in it are relatively known. My book with the title Blue Planet in Green Shackles has been already published in 12 languages and, two and a half years after its original publication, I don’t have any urgent need to rewrite it.

We should not forget how the doctrine of global warming came into being. In a normal case, everything starts with an empirical observation, with the discovery of evident trends or tendencies. Then follow scientific hypotheses and their testing. When they are not refuted, they begin to influence politicians. The whole process finally leads to some policy measures. None of this was the case with the global warming doctrine.

It started differently. The people who had never believed in human freedom, in impersonal forces of the market and other forms of human interaction and in the spontaneity of social development and who had always wanted to control, regulate and mastermind us have been searching for a persuasive argument that would justify these ambitions of theirs. After trying several alternative ideas — population bomb, rapid exhaustion of resources, global cooling, acid rains, ozone holes — that all very rapidly proved to be non-existent, they came up with the idea of global warming. Their doctrine was formulated before reliable data evidence, before the formulation of scientifically proven theories, before their comprehensive testing based on today’s level of statistical methods. Politicians accepted that doctrine at the Rio Earth Summit in 1992 and — without waiting for its confirmation — started to prepare and introduce economically damaging and freedom endangering measures.

Why did they do that? They understood that playing the global warming game is an easy, politically correct and politically profitable card to play (especially when it is obvious that they themselves won’t carry the costs of the measures they implement and will not be responsible for their consequences).

I don’t see any problem with the climate now, or in the foreseeable future, and for that reason I am not sufficiently motivated to discuss the technicalities of the cap-and-trade scheme. I only protest against calling it a “market solution.” It reminds me of the communist planners who similarly talked about “using market instruments” when they finally came to the conclusion that “planning instruments” did not work. Markets can’t be used by anybody.

We should not deceive ourselves. A cap-and-trade scheme is a government intervention par excellence, not a “market solution.” How much “to cap” is the decision of the government (and the European failure several years ago — when too many carbon permits were issued — is I hope well known here). The size of the cap defines the price of carbon and this price is nothing else than a tax imposed upon citizens of the country. I agree with Lord Monckton that the cap-and-trade bill “is the largest tax increase ever to be inflicted on a population in the history of the world.” How is it possible that such arguments are not used? Why does nobody argue that to tax energy means that the costs of anti-global warming policy will disproportionally fall onto the poor people? What bothers me is that to “trade” the artificial “good” — the permits — means that a new group of rent-seekers will arise who will make profits at our expense. Why doesn’t anybody say that the carbon permits have no intrinsic value other than by government decree? I could continue along these lines.

But we should return to the beginning. Despite huge scientific efforts and spending, it has not been proved that the human effect on the climate is statistically significant. Once again Lord Monckton: “the correct policy to address a non-problem is to have the courage to do nothing.”

This country, my country, as well as the rest of the world face many real issues. We do not need to solve non-existing problems. I don’t think the real issue is temperature and/or CO2, but a new utopian vision of the world. We have only two ways out: salvation through carbon capping or prosperity through freedom, unhampered human activity, productivity and hard work. I vote for the second option.

Václav Klaus is the President of the Czech Republic. On Nov. 4, the Washington Times hosted a briefing, “Advancing the Global Debate over Climate Change Policy” at the Willard Hotel in Washington, D.C. These remarks were given at the last panel of that event. Photo: Václav Klaus (Reuters) Source