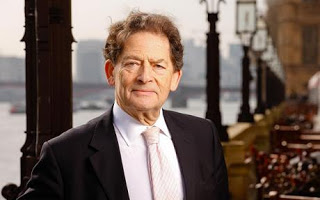 Lord Lawson, the former UK chancellor, has called for an independent inquiry into claims that leading climate change scientists manipulated data to strengthen the case for man-made global warming.

By Matthew Moore
Thousands of emails and documents stolen from the University of East Anglia (UEA) and posted online indicate that researchers massaged figures to mask the fact that world temperatures have been declining in recent years. This morning Lord Lawson, who has reinvented himself as a prominent climate change sceptic since leaving front line politics, demanded that the apparent deception be fully investigated. He claimed that the credibility of the university’s world-renowned Climatic Research Unit – and British science – were under threat. “They should set up a public inquiry under someone who is totally respected and get to the truth,” he told the BBC Radio Four Today programme. “If there’s an explanation for what’s going on they can make that explanation.” Around 1,000 emails and 3,000 documents were stolen from UEA computers by hackers last week and uploaded on to a Russian server before circulating on websites run by climate change sceptics. Some of the correspondence indicates that the manipulation of data was widespread among global warming researchers. One of the emails under scrutiny, written by Phil Jones, the centre’s director, in 1999, reads: “I’ve just completed Mike’s Nature [the science journal] trick of adding in the real temps to each series for the last 20 years (ie, from 1981 onwards) and from 1961 for Keith’s to hide the decline.” Prof Jones has insisted that he used the word “trick” to mean a “clever thing to do”, rather than to indicate deception. He has denied manipulating data. Another scientist whose name appears in the documents accused the hackers of attempting to undermine the drive for a global consensus at next month’s Copenhagen summit. Kevin Trenberth of the US National Center for Atmospheric Research accused climate change sceptics of cherry-picking the documents and taking them out of context. Meanwhile, hopes that a legally binding treaty on cutting emissions will be agreed at Copenhagen have been boosted by the news that more than 60 world leaders plan to attend. Last week Lord Lawson, who served as chancellor for six years under Margaret Thatcher, told The Daily Telegraph that he planned to establish a think tank to challenge the consensus that drastic action is needed to combat global warming.