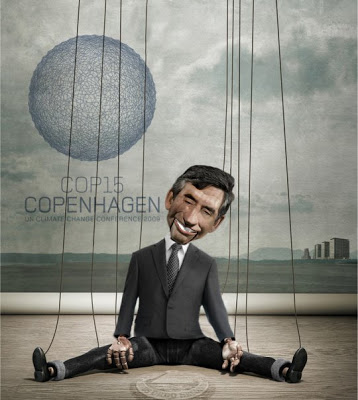 With delegates from 194 nations present, the Copenhagen Climate Conference in Denmark got off to a fitting start with a film focusing on the alleged apocalyptic consequences of not acting to stop global warming before it’s too late. The planet will be ravaged and millions of people will die horrifying deaths as increasing temperatures in the Earth’s atmosphere result in a monumentally devastating deluge of man-made floods, droughts, storms, and rising seas. At the end of the terrifying film, a sweet little girl plaintively begs the conference attendees to “please help save the world.” It’s a script right out of Hollywood, made to order for an Academy Award-winning spectacular produced by Cecil B. DeMille or George Lucas. There’s just one problem: It would have to be titled “Climate Scam” because of the ultimate inconvenient truth: The case for global warming is based on junk science. This reality became clear recently when thousands of e-mails were made public by an unknown person or persons who somehow gained access to the computers at ground zero for global warming data and research, the Climate Research Unit of East Anglia University in Britain. Among the e-mails were multiple messages in which many of global warming’s most respected advocates discussed how to suppress data that contradicts their view that the Earth’s atmosphere is being warmed to dangerous levels by the burning of fossil fuels like oil, natural gas and coal. There were also multiple e-mails in which they discussed how to prevent studies by global warming critics from being published in peer-reviewed scientific journals, and how to avoid answering or at least deflect freedom of information act inquiries about their data and research techniques. In the most disturbing of the e-mails, Phil Jones, the CRU’s director, asked colleagues to “hide the decline” in recent temperature data. Jones has since stepped aside, pending the outcome of an investigation. Instead of ignoring this science fraud, the Copenhagen delegates ought to be demanding that an independent investigation be undertaken as soon as possible of the CRU data used in the United Nations’ Report of the Inter-governmental Panel on Climate Change. The IPCC report is the fulcrum upon which all global warming policymaking rests, both internationally and here in America. Experts from across the spectrum of opinion for and against global warming agree that suppressing CO2 emissions sufficiently to avoid the predicted calamities would be prohibitively expensive. Since the IPCC report is based on faulty data and the Copenhagen delegates refuse to acknowledge East Anglia’s climate scam, President Obama should challenge the United Nations to put the Denmark deliberations on hold. The one thing global warming advocates and skeptics ought to agree on is that policy must be based on credible data.Source