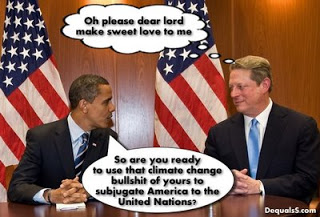 Contrary to a popular myth Al Gore and his followers are among the biggest enemies of the environment. Contrary to their lies carbon dioxide (CO2) is not a pollutant. CO2 is essential to biological life.

The CO2 cycle is the basis of carbon based biological life. Plants are carbon structures and CO2 provides the carbon they need. Carbon is the second most common element in the human body. http://www.madsci.org/posts/archives/1999-05/927309210.An.r.html Humans and other animals get their energy from the complex carbon compounds plants produce. For example, each molecule of table sugar contains 12 carbon atoms. Plants are the original solar energy collectors. Plants store solar energy as the chemical bonds of carbon molecules. The ability of plants to grow depends upon the available sunlight and the amount of CO2 in the air. The global warming crowd claims that the atmosphere has too much CO2, but fast growing young plants benefit from higher concentrations . Some greenhouses use twice the concentration of CO2 to encourage faster, sturdier growth, in young plants. http://www.imok.ufl.edu/veghort/docs/physio_121202b.pdf Plants use CO2 to produce food for animals which return part of the CO2 to the atmosphere for plants to reuse. Unfortunately, humans don’t return all plant carbon to the environment. Humans use plant carbon for building materials, clothing and long lasting paper products such as books. Humans also put carbon containing food materials along with other carbon materials into landfills where it is unavailable for plants. If it weren’t for the combustion of carbon containing fossil fuels we might already be facing a shortage of atmospheric CO2 that could significantly reduce food production. Production of biofuels depends upon ample supplies of CO2. The most productive biofuel plants would benefit from higher concentrations of CO2 because more carbon would be available for conversion to fuel. CO2 provides the best way to return carbon to the environment for plants to reuse. Animals exhale CO2 as their bodies use carbon molecules for energy. The wind moves it from where it is produced to where plants are growing. The CO2 molecule is one of the simplest carbon molecules and is easy for plants to take apart for construction of complex molecules. The cell is a microscopic factory. Its genes are programmed to process CO2 into other molecules. Taking carbon from the air is more efficient for plants because the carbon is available where it is needed. Contrary to the lies of Gore and others, increasing the amount of CO2 in the atmosphere will not increase temperatures. Niels Bohr disproved the claim that the atmosphere was heated by absorbing infrared radiation (IR) with research that indicated the process of absorbing specific wavelengths of light changed the energy state of the electrons in gas molecules instead of increasing their temperature. Physicist R. W. Wood demonstrated in a 1909 experiment that trapping IR did not heat greenhouses as many in the 19th Century had believed and thus the process could not heat the atmosphere either. It would be easier to make a case that increasing the amount of CO2 in the atmosphere would reduce temperatures. Plants use CO2 to store solar energy in the form of chemical fonds of carbon molecules rather than converting it into heat. Plant covered areas do not become as hot as nearby areas that lack plant cover. Bare ground converts solar radiation to heat. Increasing the availability of CO2 means that plants can store more solar energy than is possible with current levels of CO2. Storing more solar energy would reduce the amount of solar energy converted to heat.