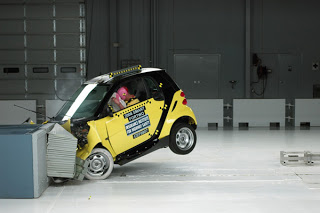 By Sam Kazman, Competitive Enterprise Institute (Published in The Wall Street Journal)
The super-high efficiency minicar has become the Holy Grail for many environmentalists. But on Tuesday, a new study on minicar safety tossed some cold water on the dream. The Insurance Institute for Highway Safety (IIHS) reported that in a series of test crashes between minicars and midsize models, minis such as the Smart car provided significantly less protection for their passengers. The tests did not involve the much ballyhooed mismatches between subcompacts and Hummers, but measured the effect of relatively modest differences in size and weight. Even though the Smart car and other minis such as the Honda Fit and the Toyota Yaris have fared relatively well in single-car crash tests, they performed poorly in these two-car frontal offset collisions. In the words of IIHS president Adrian Lund, “though much safer than they were a few years ago, minicars as a group do a comparatively poor job of protecting people in crashes, simply because they’re smaller and lighter.” That difference is reflected in the real world. The death rate in minis in multi-vehicle crashes is almost twice as high as that of large cars. And in single-vehicle crashes, where there’s no oversized second vehicle to blame, the difference is even greater: Passengers in minis suffered three times as many deaths as in large cars. Given the nonstop pronouncements we’ve been hearing about the green promise of high-efficiency cars, these results were shocking to some. But not to IIHS. The Institute has long been reporting similar results from other tests, and its publications candidly advise that, when it comes to safety, larger and heavier cars are generally better. That’s not what advocates of higher fuel-economy standards want to hear. Greater weight may increase crashworthiness, but it also decreases miles per gallon, so there’s an inevitable trade-off between safety and efficiency. A 2002 National Research Council study found that the federal Corporate Average Fuel Economy (CAFE) standards contributed to about 2,000 deaths per year through their restrictions on car size and weight. But amazingly, with the exception of IIHS, there’s practically no one else providing information on the size-safety issue: – Not the National Highway Traffic Safety Administration, which has a highly dubious track record on CAFE. In a 1992 lawsuit filed by the Competitive Enterprise Institute, and Consumer Alert, a federal appeals court found the agency guilty of using “mumbo jumbo” and “legerdemain” to conceal CAFE’s lethal effects. – Not the Environmental Protection Agency, which is about to become a major partner in setting CAFE standards. EPA is often fixated on minute risks, such as radon in drinking water, but don’t expect it to admit to CAFE’s dangers. Its official mission may be “to protect human health and the environment,” but its operating philosophy seems to be “not necessarily in that order.” – Not Ralph Nader and his allied traffic safety groups, which are often CAFE’s most energetic cheerleaders. Decades ago, Mr. Nader and his colleagues repeatedly warned of the hazards of small cars. The Center for Auto Safety’s 1972 book “Small — On Safety,” noted “the inherent limitations” that “small size and light weight” impose on crashworthiness. But in the 1990s both Mr. Nader and the Center reversed their position. Why? Because CAFE presented them with a stark choice between more government power and more safety. They went for more power. – Not Consumer Reports, which has consistently failed to mention the importance of size and weight in discussing how to choose a safer car. Though it is regarded as the information bible by many car buyers, not a single one of its annual auto issues in the last five years has touched on this topic. As the National Research Council reported, the current CAFE program — 27.5 mpg for passenger cars — contributed to about 2,000 deaths. But driving is going to get even more lethal over the next decade: CAFE standards will be raised to a 35 mpg combined average for cars and light trucks. And with the notable exception of IIHS, information about those risks may be hard to come by.

One thought on “Small Cars Are Dangerous Cars”