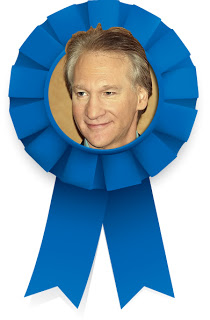 As part of a new weekly offering, Climate Change Fraud will be awarding the dubious honor of “Alarmist of the Week” to the one person or organization that symbolizes everything that’s wrong in the climate debate. This person or organization will have either spoken outright lies, half-truths, maligned other scientists, or used ad hominem attacks to further the cries of climate alarmism.

This week’s winner is the Chicken Little of Global Warming alarmists. Week after week on his show Real Time, he either devotes entire segments to worn-out ‘facts’ that even the IPCC has repudiated, or manages to squeeze in a bit of name-calling that makes little or no sense.

The good news is that Real Time is on HBO, so his viewership is extremely limited as compared to a network/cable channel. This week he said climate change skeptics are “so stupid they make me question evolution.” (see video) And for those who don’t remember, Maher also said the 9/11 terrorists were not cowardly. “We have been the cowards lobbing cruise missiles from 2,000 miles away. That’s cowardly. Staying in the airplane when it hits the building, say what you want about it, it’s not cowardly.”Source

One thought on “Alarmist of the Week: Bill Maher”