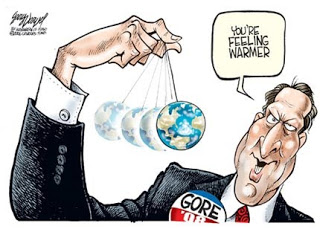 Al Gore is the principal prophet of doom in the global warming debate, and the 2006 documentary An Inconvenient Truth is his gospel to true believers. But Gore has misled them.

Two years ago, British High Court Justice Michael Burton characterized Gore’s film as “alarmism and exaggeration in support of his political thesis.” The court, responding to a case filed by a parent, said the film was “one-sided” and could not be shown in British schools unless it contained guidelines to balance Gore’s attempt at “political indoctrination.” The judge based his decision on nine inaccuracies in the movie. The Gore-loving U.S. media largely ignored the story, but starting premiere night Oct. 18, Americans will hear it in Not Evil Just Wrong. To set the stage, here is a recap of Gore’s claims and why they are flawed:

WATCH THE FIRST TWO QUICK VIDEOS ON THIS LINK TO SEE ALL 35 OF GORE’S LIES, SCIENTIFICALLY DOCUMENTED: CLICK HERE.