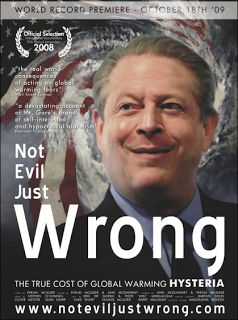 Irish filmmaker Phelim McAleer couldn’t get Hollywood interested in his conservative answer to Al Gore’s “Inconvenient Truth,” so he’s trying to promote it a different way — by getting tea party protesters to turn out for thousands of screenings across the country Sunday night. McAleer is billing the multicity premiere of “Not Evil Just Wrong” as the world’s largest simultaneous film viewing, and he says the “cinematic wing of the tea party movement” is just the ticket for making it work. “This is tailored-made for the tea party movement,” says McAleer. “A small tea party is like a small theater.” To promote the film, McAleer dialed in to Wednesday’s weekly conference call for 150 tea party leaders in California. Dawn Wildman, co-coordinator of the California Tea Party Patriots, said the reaction was tremendous. “I think it is a marvelous idea, in the sense you are actually bringing it to the people,” Wildman said. In San Diego, Wildman is expecting about 150 people to show up at a veterans’ museum to watch the film. In Newport Beach, she said, a group of 100 is expected to watch the film at a restaurant. And organizers in Bakersfield are planning on showing the movie three separate times. While Tea Party protests have so far focused more on government spending than environmental issues like global warming or the cap-and-trade bill working through Congress, tea party leaders says it’s time for the movement to branch out. “It says a lot for the American people and the movement if we can consistently be looking at public policy or fiscal responsibility and evaluate pieces as they come out — whether they be film pieces or books or any kind of intellectual pieces come out,” says Everett Wilkinson, a tea party leader in Florida. And while a few YouTube video clips have helped ignite the conservative base — such as Rick Santelli’s on-air diatribe against government bailouts and South Carolina Republican Rep. Joe Wilson’s “You lie!” outburst — Wilkinson said it will be a first to see his fellow Tea Party activists moved by film. McAleer, who will watch the film at a screening in Vancouver on Sunday night, started work on the project in early 2007, about a half-year after the release of “An Inconvenient Truth,” Gore’s alarm bell on global warming. At first, McAleer’s team was small — mostly just him and his wife, Ann McElhinney. But at the end of 2008, their work got some buzz in the European press and generated interest at the International Documentary Film Festival Amsterdam.