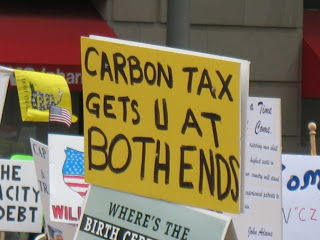 Momentum has been building for months, and now the big Not Evil Just Wrong day is finally here. Come Sunday at 8 p.m. EST, it’s time for a cinematic tea party! All across America and around the world, people will display their movie posters, roll out their pieces of red carpet, and help Ann and Phelim set a world record for a simultaneous movie premiere. The resistance against Al Gore and his cronies of capitalistic destruction begins now! With 6,000 screening in 27 countries, it’s going to be one amazing party. There will be premieres in every state as consumers fight to protect their American Dream from draconian regulations inspired by global warming hysteria. How excited are people about this premiere? The announcement on the Web site of the Heritage Foundation, where Ann will speak along with headliners like Andrew Breitbart of Big Hollywood and Big Government fame, says it all: “The auditorium is at capacity. No more RSVPs will be accepted.” Professors Richard Lindzen and Don Roberts, two of the characters in Not Evil Just Wrong, also will speak at the Heritage screening. And Christopher Lord Monckton, who also appears in the film, will be part of the premiere at Texas A&M University in College Station. Canadians are part of the resistance, too. Every province there will be part of premiere night, and Phelim will host one in Toronto. [Ed’s note: Phelim will actually be at the Vancouver premiere]
Greenpeace co-founder Patrick Moore, another expert interviewed in the documentary, also will join the party at Hollywood Theatre in Vancouver, where the movie will play on the big screen. The Fraser Institute is supporting that effort. Here’s a sampling of other public screenings on premiere night:

Get the details about other public premieres of the movie on the Not Evil Just Wrong site and at our Facebook fan page. If you’re not already one of our fans, please join the more than 4,300 people who have joined our online resistance there. And if you really want to be wowed, take a gander at our Google map of premieres around the world. It includes both public premieres and those in people’s homes. It’s the perfect portrait of a cinematic tea party in action, and you can be part of it!Source