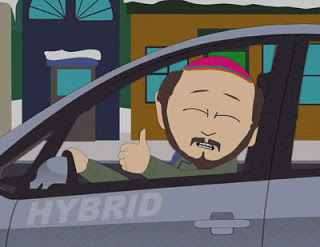 The political and international divide over green energy politics is growing. Not only are the prospects of over ambitious plans such as Koyoto II getting gloomier in the ongoing financial crisis, it is becoming increasingly clear that the green renewable energy issues could create problems of the same magnitude as our present oil-dependency. As the Atlantic reports in its May issue, the exploding demand for hybrid cars and windmills is likely to create a bottle neck in the supply of a commodity with the exotic name of neodymium. Neodymium is a crucial material for build lightweight permanent magnets “that make the Prius motors zoom” and are needed for the generators of wind mills as well. In fact, the present production of neodymium would have to be doubled in order to make just a few million electric cars. The main pit for neodymium in the US, California’s Mountain Pass, has recently been closed after a series of leaks released hundreds of thousands of gallons of radioactive waste into the environment. The dirty little secret of green cars and windmills is that the neodymium has to be yielded from rare-earth ore, which are regularly contaminated with radioactive thorium. More here

More about the dangers of hybrids and biofuels HERE.