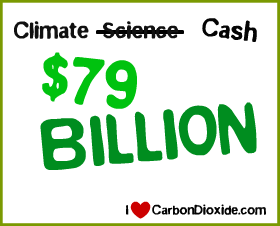 For the first time, the numbers from government documents have been compiled in one place. It’s time to start talking of “Monopolistic Science”. It’s time to expose the lie that those who claim “to save the planet” are the underdogs. And it’s time to get serious about auditing science, especially when it comes to pronouncements that are used to justify giant government programs and massive movements of money. Who audits the IPCC?

Read the Full Report at the Science and Public Policy Institute.

There doesn’t necessarily need to be a conspiracy. It doesn’t require any centrally coordinated deceit or covert instructions to operate. Instead it’s the lack of funding for the alternatives that leaves a vacuum and creates a systemic failure. The force of monopolistic funding works like a ratchet mechanism on science. Results can move in both directions, but the funding means that only results from one side of the equation get “traction”.

Billions in the Name of “Climate”

In total, over the last 20 years, by the end of fiscal year 2009, the US government will have poured in $32 billion for climate research—and another $36 billion for development of climate-related technologies. These are actual dollars, obtained from government reports, and not adjusted for inflation. It does not include funding from other governments. The real total can only grow.

In 1989, the first specific US climate-related agency was created with an annual budget of $134 million. Today in various forms the funding has leapt to over $7,000 million per annum, around 50 fold higher. Tax concessions add to this. (See below for details and sources.)

This tally is climbing precipitously. With enormous tax breaks and rescue funds now in play, it’s difficult to know just how far over the $7 billion mark the final total will stand for fiscal year 2009. For example, additional funding for carbon sequestration experiments alone amounted to $3.4 billion in the American Recovery and Reinvestment Act of 2009 (not included in the $7 billion total above).

The most telling point is that after spending $30 billion on pure science research no one is able to point to a single piece of empirical evidence that man-made carbon dioxide has a significant effect on the global climate.

If carbon is a minor player in the global climate as the lack of evidence suggests, the “Climate Change Science Program” (CCSP), “Climate Change Technology Program” (CCTP), and some of the green incentives and tax breaks would have less, little, or no reason to exist. While forecasting the weather and climate is critical, and there are other good reasons to develop alternative energy sources—no one can argue that the thousands of players who received these billions of dollars have any real incentive to “announce” the discovery of the insignificance of carbon’s role.

“Thousands of scientists have been funded to find a connection between human carbon emissions and the climate. Hardly any have been funded to find the opposite. Throw 30 billion dollars at one question and how could bright, dedicated people not find 800 pages worth of connections, links, predictions, projections and scenarios? (What’s amazing is what they haven’t found: empirical evidence.)”

Monopolistic funding creates a ratchet effect where even the most insignificant pro-AGW findings are reported, repeated, trumpeted and asserted, while any anti-AGW results lie unstudied, ignored and delayed. Auditing AGW research is so underfunded that for the most part it is left to unpaid bloggers who collect donations from concerned citizens online. These auditors, often retired scientists, are providing a valuable free service to society, and yet, in return they are attacked, abused, and insulted.

The truth will come out in the end, but how much damage will accrue while we wait for volunteers to audit the claims of the financially well-fed?

The stealthy mass entry of bankers and traders into the background of the scientific “debate” poses grave threats to the scientific process. The promise of “trillions of dollars” on commodity markets—with all of that potential money hinging on finding that human emissions of carbon dioxide have a significant role in the climate—surely acts like blanket of mud over open dispassionate analysis.

All of this means we must be extra diligent in only focusing on just the evidence, the science, the empirical data. Illogic and unreason cloud a debate already loaded with bias. When there are so many incentives encouraging unclarity and overcomplexity, the simple truths need help to rise to the top. But who funds the counter-PR campaign—now that even Exxon has been howled out of the theater of science. There is hardly any money promoting Natural Causes of Climate Change, while billions upon trillions promote Unnatural Forces.

In this scientific debate, one side is gagged while the other side has a government-funded media campaign.
Read rest