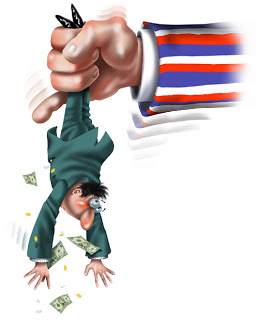 In a landmark decision long pushed for by some environmentalists and money-hungry politicians, the U.S. Environmental Protection Agency has almost officially declared CO2 — AKA plant food, the air you exhale, the bubbles in beer, and the basis of all life — a “pollutant”.

As the Earth continues to cool and the rest of the world has begun to realize that CO2 is neither a pollutant nor a climate driver, the EPA and the Obama administration continue to push the hoax of the century on an increasingly skeptical public. It seems as though Al Gore and the lobbyists are also ramping up their campaigns against science and reason in light of the fact that more and more people are waking up to the reality of this scam.

If the EPA succeeds in its proposed finding, this will in effect give the government the LEGAL ABILITY to tax and severely control nearly everything in our lives, ranging from driving your car all the way to switching on a television, using a hairdryer, mowing your lawn, or heaven forbid burning a candle.

This EPA “finding” cannot be allowed. All the factual science has been thrown into the trash in favour of a fatally flawed ideology and completely unfounded fear of a hypothetical human-caused climate change which is not happening, and we will all pay dearly for it.

In fact, millions of people in the third world will pay with their lives for this outrageous way of thinking, especially if this type of unscientific policy spreads around the world as many environmentalists are hoping for. Countless souls have already starved to death thanks to the nonsensical push for biofuels which has taken over food crops around the world. This madness must be stopped.

The EPA is taking comments from the public for 60 days before their decision is finalized, so PLEASE make your voices heard. Tell the legislators and politicians that we aren’t going to fall for it, and tell them to throw their junk science out the window along with this ridiculous idea that carbon is “pollution”. More and more honest politicians and unbiased (IE: non-government funded) scientists are speaking out daily but their voices are heavily suppressed and effectively silenced by Big Environment and socialist green agendas.

“At a time when many Americans are being indoctrinated in a belief system based on a political agenda rather than science, it becomes the responsibility of those who have not drunk the global warming Kool-Aid to question and to confront those who are pushing global warming propaganda.

Proposed climate change legislation that seeks to limit coal, oil and nuclear as sources of energy must be opposed in mass by the American people, unless they view with fondness the horse and buggy days. Not to do so would mean a victory for global warming alarmists and their agenda.”

Please visit this link to submit your comments to the EPA. Do it now, and spread the word to everyone you know.

Steve Milloy at Green Hell Blog suggests that it is time for a Green Tea Party protest, and we agree. With thanks to AlGoreLied.com, you can now get your very own bumper sticker to show your support!