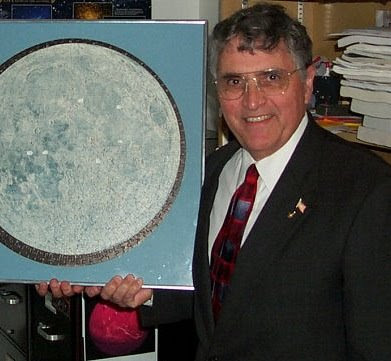 SANTA FE, N.M. — Former astronaut Harrison Schmitt, who walked on the moon and once served New Mexico in the U.S. Senate, doesn’t believe that humans are causing global warming.

“I don’t think the human effect is significant compared to the natural effect,” said Schmitt, who is among 70 skeptics scheduled to speak next month at the International Conference on Climate Change in New York.

Schmitt contends that scientists “are being intimidated” if they disagree with the idea that burning fossil fuels has increased carbon dioxide levels, temperatures and sea levels.

“They’ve seen too many of their colleagues lose grant funding when they haven’t gone along with the so-called political consensus that we’re in a human-caused global warming,” Schmitt said.

Dan Williams, publisher with the Chicago-based Heartland Institute, which is hosting the climate change conference, said he invited Schmitt after reading about his resignation from The Planetary Society, a nonprofit dedicated to space exploration.

In his resignation letter, the 74-year-old geologist argued that the “global warming scare is being used as a political tool to increase government control over American lives, incomes and decision-making.”

Williams said Heartland is skeptical about the crisis that people are proclaiming in global warming.

“Not that the planet hasn’t warmed. We know it has or we’d all still be in the Ice Age,” he said. “But it has not reached a crisis proportion and, even among us skeptics, there’s disagreement about how much man has been responsible for that warming.”

Schmitt said historical documents indicate average temperatures have risen by 1 degree per century since around 1400 A.D., and the rise in carbon dioxide is because of the temperature rise.

Schmitt also said geological evidence indicates changes in sea level have been going on for thousands of years. He said smaller changes are related to changes in the elevation of land masses — for example, the Great Lakes are rising because the earth’s crust is rebounding from being depressed by glaciers.

Schmitt, who grew up in Silver City and now lives in Albuquerque, has a science degree from the California Institute of Technology. He also studied geology at the University of Oslo in Norway and took a doctorate in geology from Harvard University in 1964.

Schmitt said he’s heartened that the upcoming conference is made up of scientists who haven’t been manipulated by politics.

Of the global warming debate, he said: “It’s one of the few times you’ve seen a sizable portion of scientists who ought to be objective take a political position and it’s coloring their objectivity.”