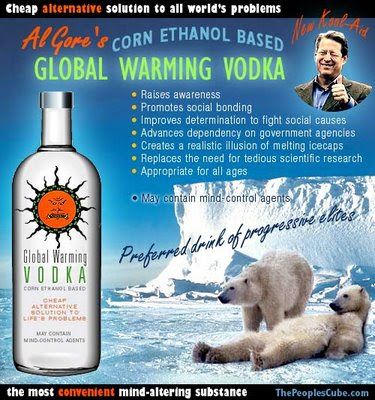 The Carbon Sense Coalition yesterday accused coal companies, power companies and governments of gross negligence for wasting resources from shareholders, electricity consumers and taxpayers on quixotic dreams to capture and bury carbon dioxide from power stations. The Chairman of the Carbon Sense Coalition, Mr Viv Forbes, said that there were five main objections to Carbon Capture and Storage (CCS):

Firstly, there are no possible climate benefits because carbon dioxide in the atmosphere does not control climate and the tiny effect of man’s emissions is wholly beneficial. There has been no open scientific enquiry into the justification for demonising carbon dioxide, and a large and growing scientific opposition to the whole global warming hysteria. Secondly, there is no public health justification for CCS because carbon dioxide is not a pollutant. It is a colourless, non-toxic gas and in fact a valuable plant food. A warm climate with abundant carbon dioxide in the atmosphere will be beneficial for all life. Thirdly, CCS can never be “economic” because there are huge costs and zero benefits. Fourthly, CCS will divert a vast amount of community savings into stupid investments which will be abandoned in a more enlightened future time. And finally, neither taxpayers nor shareholders have seen a full cost benefit analysis of the CCS proposals by independent experts. They have no idea of the guaranteed huge cost and the illusory benefits.

“Every day we hear people sounding off about “dirty coal”. Coal is a natural substance and every element in coal reflects the composition of living plants and plays a part in sustaining healthy life. Coal is as natural as the forests from which it came, with the same fuel components as natural gas, more natural than distilled ethanol, and as clean the healthiest soil in a good garden. Like any substance you can name, coal can be dangerous if misused – people in a sealed room can suffocate from the open fire burning wood, or from their own breathing, but sensible people make sure a window is open to allow their combustion products to diffuse into the vast atmosphere.

The same problem arises if there are too many open fires in cities, where poor combustion and lack of modern pollution scrubbers produces a toxic concentration of soot, ash and polluting gases (as in Asia now). Poor combustion with insufficient oxygen can also produce the poisonous gas carbon monoxide, but nowhere is carbon dioxide a problem in the open atmosphere.

“Clean electricity from modern coal-fired power stations is what has cleaned up the smogs of London and Pittsburgh, and can do the same for the Asian smog.

“The earth is already burying valuable carbon resources in vast deposits of limestone, dolomite, magnesite and gypsum in oceans and lakes and in organic matter being buried at sea by flooding rivers.

“Despite all the hysteria by Al Gore and others, the carbon dioxide levels in the atmosphere are lower now than at many times in earth’s history. So low in fact that if we were successful in capturing and burying all of man’s emissions of carbon dioxide, many people may starve as plant growth would be so reduced that food production would not support today’s population. Burning fossil fuels has had the serendipitous effect of aiding the world production of food and supporting our large populations.

“We hear proponents bleating wistfully about the possibilities of proving that CCS is “economic”. It can NEVER be economic, because there are no benefits – nothing to offset the huge capital costs, nothing to repay the large increase in power generating costs. It can only ever be a mammoth waste of energy, resources and money.

“Building large high pressure pipelines that end up in carbon cemeteries can only be made to look economic by heavy taxes on emissions of harmless carbon dioxide. But even with this artificial subsidy, so-called clean coal plants are being abandoned because of the escalating costs.

“The engineering obstacles to carbon capture and storage guarantee that the capital and operating costs will be very large.

“For every tonne of coal burnt, and after all the polluting gases and soot are removed, over 3 tonnes of carbon dioxide remains. This huge quantity of hot gas has to be captured, cooled, separated from the other “greenhouse gas” (water vapour), compressed and pumped in huge high-pressure pipelines to some distant spot where deep wells have been drilled to allow this valuable gas to be pumped underground, where it is hoped it will stay.

If CCS is installed, electricity costs must rise dramatically. Even the research, planning and design costs will be huge, decades before any CCS plant will operate. Queensland alone has already committed over one billion dollars to this foolish dream.

(In a few favourable locations this gas could be used to drive more oil or gas out of depleted oil fields and this proven technique is already being used where it makes economic sense – it should not be force fed by carbon taxes.)

“All of this separation, compressing and pumping requires . . . more energy from more coal burning. So we burn more coal, each tonne of which produces over three tonnes of CO2, in order to reduce emissions of CO2?? Who is fooling whom? The main game is to reduce consumption of our valuable fossil fuels, so why would anyone support this wanton destruction of resources, energy and capital? And why stop at power stations? There are also hundreds of cement plants, natural gas projects, steel works, coke plants and smelters of all kinds that release carbon dioxide. Are they all destined to be strangled by CCS?

“Even if some naive countries, corporations or governments do spend community savings on these white elephants, they will soon be abandoned. They will be as useful to us as the pyramids were to the Pharaohs, and future generations will marvel at the abandoned compressors, the derelict pump stations and the pipelines going nowhere.

“Green extremists know that CCS is a fantasy but see it as a great weapon to cripple coal and make their fairyland windmills and solar panels look sensible.

“Their green plans aim to put anyone who relies on coal deep into the red.”
> To read more on the stupidities of “Burn and Bury”.