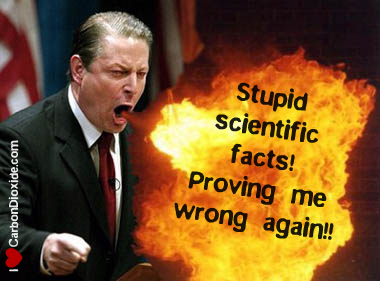 The United Nations is pulling out the “big guns” in an attempt to create a climate of urgency about climate change so that the meeting of over one hundred world leaders in Copenhagen some 75 days from now can produce an agreement to replace to failed Kyoto accord.

Nature, however, is not co-operating. Average global temperature is rising at 1.40C per century, not the 3.90C indicated by the IPPC models. We are in the seventh year of global cooling. Sea levels, despite messages to the contrary, are rising at normal rates – eight inches per century – much less than the IPPC models suggested. There has been no significant rise in sea levels over the last four years. Arctic sea ice, currently in its summer state, is more extensive in 2009 than it was in 2007 and 2008. Antarctic sea ice is at record high. Global sea ice shows relative stability over the last thirty years. While CO2 levels are rising, the rate of growth has slowed considerably – the IPPC suggested that CO2 levels would grow at around 468 parts per million (ppm) per century, when in fact the observed growth in CO2 is 204 ppm per century – less than half of the IPPC model suggestion.

Hurricane activity, which does not appear to be connected to CO2 emissions, is at the lowest level since satellite monitoring and observation began in 1979. In the Northern Hemisphere, hurricane activity is currently one of the quietest in a decade. Reefs off the Keppel Islands on Australia’s Great Barrier Reef have shown rapid recovery of coral dominance, despite repeated coral bleaching events that many ascribe to CO2-induced global warming. All in all, nature does not seem to be co-operating with Secretary General of the United Nations Ban Ki Moon and the climate change negotiators.

Neither is China. Despite high expectations that they would enter into a global agreement which involves a commitment to curb green house gas emission by an agreed targeted amount, China indicated that they see this issue as a national one, requiring balance between China’s need to continue rapid development and manage its environmental conditions. It will not be told what to do by the international community. Neither will India.

The United States is ambivalent. While President Barack Obama clearly sees climate change as a clear and present danger, legislatures are deeply divided about the appropriate response. The House of Representatives has approved a bill that provides for a cap and trade for carbon credits, the free allocation of a large number of carbon credits to polluting companies and regulation of vehicle emissions. The Senate, however, is delaying consideration of the issue and is not likely to pass any legislation before Copenhagen.

The current US proposals will not have any substantial impact on either carbon emissions in the US or on global temperature. They will, however, have an impact on the economy – higher energy prices, changes in transportation systems and in consumer behaviour. They may also help to stimulate the creation of green jobs, but at the expense of jobs in other sectors. What will certainly happen is that the emerging financial services (carbon trading, carbon offsets) and climate research will expand and grow. The carbon trading industry is currently worth $100 billion worldwide and research on climate change is a $7 billion industry worldwide.

Most committed are the member states of the European Union. Collectively, they have determined emissions targeted, new transportation standards and have been operating a cap and trade system for a number of years. They are also now considering the scale of technology transfer and financial aid to developing countries. They have also enacted, through EU regulation, constraints on consumer behaviour – making it illegal to sell certain kinds of light bulbs, creating incentives for smart energy purchases and smart grid technologies.

It will be a long meeting in Copenhagen and it looks unlikely that it will be able to conclude the kind of comprehensive agreement Ban Ki Moon is seeking – the fractures between the parties and the challenges of securing agreed targets are likely to be significant.

The G8 summit showed that this was the case with just eight nations – there will be over one hundred in Copenhagen.

Some climate change scientists are becoming concerned that the momentum for Copenhagen is already fading and that the possibility of agreement is looking more unlikely than it was at the beginning of the year. They are beginning to use science to argue the polemics of the case rather than just draw attention to the science – the lines between scientific inquiry and political action are becoming blurred.

It will be an interesting time between now and December, with the voices of concern already becoming shrill. What is needed are some calm, reflective and realistic minds focused on what is possible and the consequences of the possible actions for both the environment and the economy. They may well be in short supply and will almost certainly find themselves castigated for not being committed to environmentally-sound change or as “deniers” – but we need such objective analysts to provide support for the general public in their attempts to assess the work of their governments.