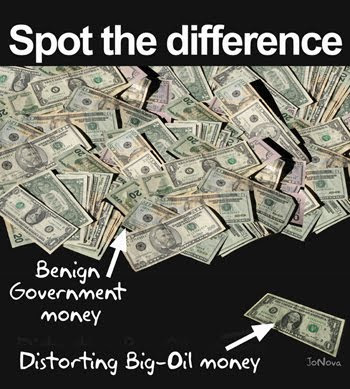 “Hypocrisy can afford to be magnificent in its promises, for never intending to go beyond promise, it costs nothing” Edmund Burke

I experienced two apparently disparate events recently. Both speak to the magnificent hypocrisy Burke identifies. They also illustrate Burke is wrong when he said it costs nothing. We’re all paying and will continue to pay for hypocrisies in climate science and research funding.

The first event involved a stay in an upscale hotel. I’ve learned to ignore moral lectures in the bathroom – reuse the towels and save the planet – because I know the real beneficiary is hotel profit. Now it’s gone further. This time there was a “green” card I could hang on my door to stop the room being serviced at all. I didn’t use it because of the profit issue, but it would also put hotel support staff jobs in jeopardy. I have no problem with profit, free enterprise and capitalism; however, the hypocrisy of corporations exploiting the environment and people’s guilt purely for profit is obscene.

Guess Who is Funding Them Now.

The second event was participation on a radio program about a report by researchers at Simon Fraser University (SFU) predicting increased disasters from severe weather because of global warming.

One of the authors was a former Assistant Deputy Minister (ADM) at Environment Canada but this wasn’t in the press release. He also chaired the meeting at Villach in 1985 that led to the establishment of the Intergovernmental Panel on Climate Change (IPCC) in 1988. Now a retired bureaucrat he fosters claims of an increase in catastrophic events identified by IPCC Working Groups II and III. Like them the paper accepted without question claims of Working Group I (the Science Report) that human CO2 is causing warming. Both ignore the fact their theory would result in less severe weather. It claims polar air will warm more than tropical air, which would reduce temperature contrast, thus reducing the potential for severe weather. But science and facts have nothing to do with the hypocritical scientific, political and economic exploitation of climate.

Sarcastically one can argue the SFU paper had credibility because the major sponsor was not an oil company. Instead, support came from the government of British Columbia and the corporate insurance giant Zurich. The latter’s web page notes; Our Climate Initiative takes a market-based approach to addressing the risks that we and our customers face from climate change.

Hypocritically funding from these sources somehow does not influence or bias like money from other corporations or agencies. I’ve made this point on several occasions by answering the question, “Who is funding you?” with “Greenpeace”. There’s always a stunned silence apparently confirming this as an acceptable source. It isn’t true as I explain, but neither is the charge I am paid by the oil companies. If insurance companies need to know what impacts climate change will have, isn’t the same true for energy and other companies?

Increased Profit is Not a Solution For Climate Change

Insurance company involvement in climate research is not new. Swiss Re one of the largest insurance companies in the world has long sponsored climate research as their web page proclaims, “As a leading global reinsurer we actively research, model and reinsure natural catastrophe risks from floods through winter-storms to hurricanes. We have therefore followed the development of climate change for over 20 years and participated in, or sponsored, 100’s (sic) of events and projects ranging from research and awareness building to product development and managing our own carbon footprint.”

Their presence and the error-filled address by President Obama reflect the concern that the public is not buying their climate story and Copenhagen will fail. Swiss Re’s comment that “Climate Week NY°C is an important step for us on the “Road to Copenhagen” where policy makers will make important decisions on reducing global greenhouse gas emissions and adaptation funding including the use of risk- transfer mechanisms” takes lobbying to a new level.

Swiss Re increased activity in climate research after hurricane Andrew.

A major misdirection was created when increased cost for hurricane insurance claims was incorrectly used to say hurricane frequency had increased. Zurich and Swiss Re both promote the false science of the IPCC without questioning its validity because it benefits them. Is it good business? Yes. Is it moral, scientifically accurate and good for society? No. It is pure, unadulterated, hypocritical, exploitation. Would they sponsor research that showed climate variations were quite normal and risk levels were not elevated? Of course not, any more than the Intergovernmental Panel on Climate Change entertains climate skeptics.

Most IPCC members are bureaucrats chosen by their governments and whose jobs depend on adhering to the political line. The others are researchers also funded by governments.

The Assistant Deputy Minister of Environment Canada apparently was involved in who would represent Canada on the IPCC. Wikipedia lists him as a Canadian climatologist. He is not. His degrees are in physics and oceanography.

He is also listed as chair of the board of trustees of the Canadian Foundation for Climate and Atmospheric Sciences (CFCAS), which is “Canada’s main funding body for university-based research on climate, atmospheric and related ocean work.”

This means almost total government control, as they are the main source of climate research, a pattern repeated in most countries. The graph shows the increase in US government funding and illustrates the problem as the total now exceeds $70 billion a year.

Climate Money, a study by Joanne Nova found, “that the federal Government has a near-monopsony on climate science funding. This distorts the science towards self-serving alarmism.” (Monopsony – a market situation in which there is only one buyer).

Combine this with funding from corporations also exploiting the climate change issue and balanced science has no chance.

There is Money in Hypocrisy

Apparently if you promote a solution then any vested interest is acceptable even if the problem doesn’t exist or is based on false information. But how is charging more for insurance promoting a solution? How is exaggerating risk using false and bad science creating solutions? Hypocrisy abounds with those providing and those receiving the funding. They protect their vested interest by perpetuating false information and blocking any attempt to determine the truth. They have assured that in the kingdom of the blind the blind man is king. As Frederick W. Robertson said, “There are three things in the world that deserve no mercy, hypocrisy, fraud, and tyranny.” We have all three in abundance in climate science. Hypocrisy in claiming some funding is untainted and supporting research that increases profit; fraud by using false information – a practice that would bring criminal charges in most other areas of business; and tyranny by bullying and suppressing those who seek balance and all the facts. But the ultimate hypocrisy is that the practitioners of all three claim to be our saviors. Save us from them.

“Dr. Tim Ball is a renowned environmental consultant and former climatology professor at the University of Winnipeg. Dr. Ball employs his extensive background in climatology and other fields as an advisor to the International Climate Science Coalition, Friends of Science and the Frontier Centre for Public Policy.”

Dr. Ball can be reached at: Letters@canadafreepress.com