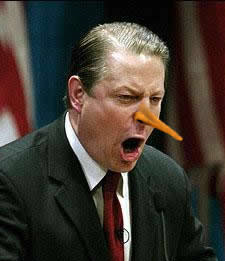 The Goreacle speaks to the AAAS

Welcome to the hottest weekly round-up since last week’s edition. It’s been a very busy week in the world of global warming changey-hoaxy, so I have a lot of links for you. In fact, if this post were a breakfast cereal I’d tell you that you’re getting 20% more sugary goodness FREE, there’s that much more stuff this week. Dip in and get your skeptic fill of news and laughs, you know you want to.

Part One: Al Gore and Friends

Global Warming prophet profit Al Gore has told anyone that would listen that the ‘debate is over’, which makes me wonder what debate he’s asking the American Association for the Advancement of Science (AAAS) to get involved in, exactly?Al likes to get others involved in his global hoax because it turns out he’s actually a shy guy and hates any sort of attention that might demand he answer a question or two about the real science. Tom Nelson discovers a cooling trend in Al’s Internet traffic… perhaps Al needs some new material?Some hunger activists want Al to make another movie, but Action Against Hunger is likely to fail in their bid to draft the scaremeister. Al’s already made as much money from starving people as he can, there is no upside for him to make another movie.Here’s another course of study that Al would have failed had he been eligible for it, which thankfully he wasn’t.Despite Al’s best alarmist efforts, his hoax is failing, despite the best efforts of his trusty servant and warming muppet Jim (Igor) Hansen.Canadian alarmist and irritating hippy David Suzuki faces some awkward questions about just how apolitical his Foundation is. Hey, he’s a geneticist not an accountant. Or a climate expert, even though Ontario is using him as the Powerwise frontman.

if only it was this easy…
Part Two: AGW Scaremongers

Prince Chuckles, the loony-tune royal that dumped the hot model so that he could marry his horse, is going to save the world by flying around in a jet that could transport over 140 people, but will have fewer that 20 aboard.

The Fresh Prince of Green Air

Tom Nelson exposes an alarmist that actually did his research. After years of alarmism, that is.Land sinking or sea rising? Does anyone care, atoll?Spare a thought for the cuddly koala that environmentalists tried to kill twice.Now that the world has no money left, the World Bank can concentrate on its real expertise, global warming.The BBC, promotes alarmist nonsense from Chris Field. The inconvenient truth about ‘climate scientist’ Field is here.The Institution of Mechanical Engineers gets blowback for peddling the global warming hoax.A skeptic and a warmist walk into a synagogue… (click for the ‘punchline’)It’s like alarmists want to lose what little public support remains, now they attack burgers?Think Progress have provided an excellent public service and have created a must-see list of what they term Climate Denial Jokers. Check out the comments where miffed skeptics plead to be added to the list, it’s the funniest thing I’ve seen since the last funniest thing I saw. Unfortunately, The Daily Bayonet failed to make the list, but rest assured I will work ever harder to gain the scorn of the hippies.A warming muppet wants even more civil disobedience, and films an anti-coal commercial, but the big news is that James Hansen fell off the deep end when he used the term ‘death-trains’ to describe coal trains. The ones that provide much of America’s power and stops people freezing to death. Pielke sums up Hansen beautifully.

Greenpeace gets beaten up by Polish Miners. Those are miners from Poland, not people who dig shoe polish, just to be clear.A global poll conspiracy, or an idiot called Lee? You decide.What do Alec Baldwin and Christie Brinkley have in common? A flat-lined IQ, that’s what.Bill Clinton, a man uncertain of the definition of the word ‘is’, declares that the “climate will crater and we won’t be able to preserve civilization” unless he gets an new intern, freshly oiled and perfumed delivered to his office every day. OK, I made that last bit up, but he was scary-alarmy, not at all hopey-changy.Canadian athletes, already assured that they will have a Gold neutral 2010, are demanding a carbon neutral event too.When Greens go bad (NSFW autoplay video – language)Part Three: Inconvenient Truths

“If every country committed to spending 0.05 percent of its GDP exploring non-carbon-emitting energy technologies, this would translate into US$25 billion per year, or 10 times more than what the world spends now. Yet, the total also would be seven times cheaper than the Kyoto Protocol, and many times cheaper than the Copenhagen Protocol is likely to be. It would ensure that richer nations pay more, taking much of the political heat from the debate.”

The inconvenient demise of ethanol, one of Al Gore’s favorite things. Oh, and it wrecks the environment too.

Global warming is bad for lizards. Butterflies too.

The UNIPCC, the oracle for the Goreacle, claims to be the consensus that proves global warming is real. How inconvenient is it then that only 1 in 5 members are actually climate scientists?

350. A dramatic sequel to the shouty “This is SPARTA” movie, or the most important number on Earth?

Global warming is actually global cooling, and it has not stopped yet.

Windmills, not that good, actually.

All the warmists depend on dodgy computer models for their doomsday predictions. It’s a pity the data they plug into those models is junk, then.

Global warming threats are empty, says a guy in Cleveland.

Global warming and The Caine Mutiny, this week’s must-read.

Nuclear power, not as scary as the greens want you to believe.

The BBC decides that the public is simply not scared enough and attempts to correct the situation.

Coldplay? Not so much as it turns out.

Good news, America, the EPA is going to ask you to bend over, again.

Green schemes, studies and scientists are getting gazillions of dollars from the Porkulus Bill. Since the sums are so vast can skeptics stop listening to the green whines about research funded by ‘big oil’? After all, surely if money corrupts science as the greens claim, they must be equally vulnerable to the lure of megabucks, right?

Part Four: AGW in the News

Australia gets it’s very own skeptics party. That’s a political party, not a drunken celebration; although one does not rule out the other, we are talking about Aussies.

Alarmists missed their moment to be honest. Again.

Minnesota pulls back on green initiatives.

Lessons the UK can learn from this winter.

Kallyvornya’s shedding jobs by the thousand. Welcome to the harsh reality of a green economy.

Want a green home? Prepare to get medieval.

This week’s hottie is brought to you courtesy of a tenuous link to Gore Lied’s decision to run his latest poll using Poll Daddy. I thought Poll Daddy sounded like Go Daddy, and so you have the fast and curvy spokesmodel for Go Daddy, Danica Patrick, for this week’s hottie. After all, every skeptic likes a fast woman. 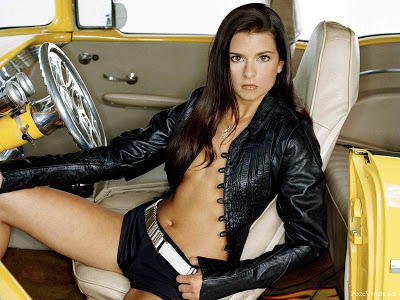 That’s a wrap for this edition of the round-up, thanks for reading and enjoy a terrific weekend.