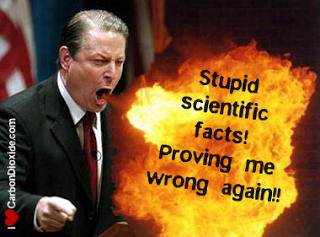 It’s truly extraordinary how every left-of-centre journalist in the country has managed to become an instant expert on the arcane subjects of global warming and the science of climate change.

Imagine, for example, if some average Canadian hack who had never studied the Middle East suddenly announced that he was an authority on Israel-Palestine, knew which side was right and knew how to solve all of the associated problems.

This, however, is what we are told every day when it comes to the fashion of sounding green. The more sympathy we can exhibit for Al Gore’s polar bear or David Suzuki’s whining, the more trendy and acceptable we become.

There are, however, an increasing number of peer-reviewed and intensely credible scientific minds who believe conventional thinking on global warming is nonsense.

One such being Lord Christopher Monckton, former science adviser to British prime minister Margaret Thatcher and a world-renowned scholar.

He was in Canada recently and appeared on my television show. A man of compelling wit and eloquence, he has defeated so many environmental activists — he calls them “bedwetters” — that few of them will now debate him.

“Al Gore has refused several times. Here is a man who is paid $300,000 per speech and has his staff control all of the questions that are asked. People ask why he is so committed,” Monckton said. “Simple. He was a failed politician worth $2 million; he’s now a famous activist worth $200 million!”

According to Monckton there are more than 700 major scientists who steadfastly refute the notion that the climate is changing to any worrying degree, that global warming is a reality and that the planet is in danger.

“It’s all about the need of the international left to rally round a new flag.”

In a series of articles he appears to show that Earth’s sensitivity to increased atmospheric concentrations of carbon dioxide is minimal.

“Take the example of the medieval warm period,” he says. “The bedwetters tell us that this was brief and irrelevant. Yet if we look at history we see it wasn’t brief and is certainly relevant. Climate does change but it’s minor and it has little if anything to do with man’s intervention.” A brief pause. “It’s about money and control. There is a lot of money to be made out of the so-called green economy and it allows people to tell us what to do — which is what some people relish doing.”

He continues: “Remember DDT, the pesticide used to kill mosquitoes that carried malaria. Jackie Kennedy read a book saying it was harmful, got her husband the president to bring pressure to have it banned and in 40 years 40 million people, mainly children, died. Now we’ve come to our senses and re-introduced it but only after the fashionable left did their damage.

“Global warming is similar. It makes no sense, is bad science and policies to deal with it will cause terrible problems. People are being indoctrinated and critics are intimidated into silence.”

Is he annoyed at his opponents’ refusal to take him on?