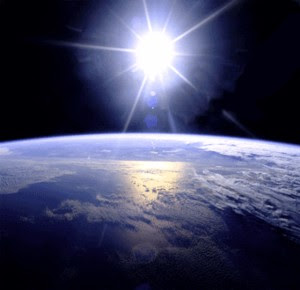 For those of us “skeptics” and “deniers” who have been jumping up and down, pointing at the Sun, and saying, “See, it’s the Sun that determines how warm or cool the Earth is. See it? Up there in the sky?” The truth about some of the scientists behind the global warming hoax has finally arrived.

The hoax has its roots in the Intergovernmental Panel on Climate Change (IPCC), an instrument of the United Nations Environmental Program, for whom global warming was the open sesame to achieving a one-world-government by scaring nations into signing a treaty that would control their use of energy, the means of producing it, and require vast billions to be sent to less developed nations in exchange for “emitting” greenhouse gases.

Energy is called “the master resource” because, if you have lots of it, you can call your own shots. If you don’t, you are condemned to live in the dark and keeping people in the dark about the global warming hoax was essential.

For years the IPCC has been controlled by a handful of the worst liars in the world, utterly devoted to taking actual climate data and twisting it to confirm the assertion that the Earth was not only warming dramatically, but that humanity was in peril of rising oceans, melting glaciers and polar ice caps, more hurricanes, the die-off of countless animal species, and every other calamity that could possibly be attributed to “global warming”, including acne.

So, around November 20, when some enterprising individual hacked into the computers of the University of East Anglia’s Climate Research Unit (CRU), making off with thousands of emails and documents that demonstrate the level of collusion and deception being practiced by its scientists.

It’s a climate hoax expose that some are calling the revelations a “little blue dress” while others are comparing it to the Pentagon Papers. It has also been dubbed “climategate.”

As James Delingpole wrote in the Telegraph, one of England’s leading newspapers, “Conspiracy, collusion in exaggerating warming data, possibly illegal destruction of embarrassing information, organized resistance to disclosure, manipulation of data, private admissions of flaws in their public claims and much more” was revealed in the 61 megabites of confidential files released on the Internet for anyone to read.

The conspirators had a visceral hatred for scientists who challenged their phony statistics and climate data, but they also agonized over the difficulties of hiding a long established climate cycle such as the Medieval Warm Period. At one point it was left out of a graph that famously became known as “the hockey stick” because it depicted a ludicrous sudden rise in warming, ignoring the previous natural cycle.

At the heart of the revelations were the intense efforts to ensure that no legitimate scientist, particularly those dissenting from the various IPCC reports, would be allowed to participate in the peer review process. Peer review is an essential element in science as it permits other scientists to examine and test the data being put forth to substantiate a new interpretation or discovery.

The IPCC reports were the basis by which popular media such as National Geographic, Time and Newsweek magazines could spread the lies about a dramatic “global warming”, passing them off to an unsuspecting and scientifically illiterate general public. At the same time, the lies were integrated them into school curriculums and maintained by Hollywood celebrities, politicians and others, duped or deliberately ignorant.

Now that Hadley CRU and its conspirators have been exposed, there truly is no need to hold a December UN climate change conference in Copenhagen; one in which nations would be required to put limits on “greenhouse gas emissions” even though such gases, primarily carbon dioxide, have nothing to do with altering the Earth’s climate.

And that is why you are going to hear more about “climate change” and far less about “global warming.” Hidden in such discussions, intended to justify legislation and regulation, is that the Earth’s climate has always and will always change.

It is, for example, shameful and deceitful for the EPA to claim carbon dioxide is a “pollutant” that should be regulated. The same applies to “cap-and-trade” legislation with the same purpose.

Billions of taxpayer dollars have been wasted on studies of global warming and poured into agencies such as NASA that have lent credence to the global warming hoax.

“The U.S. taxpayer has much exposure here in the joint projects and collaborations which operated in reliance upon what the University of East Anglia’s Climate Research Unit was doing,” says Christopher C. Horner, a longtime global warming skeptic. “There are U.S. taxpayer-funded offices and individuals involved in the machinations addressed in the emails, and in the emails themselves.”

Horner, the author of “Red Hot Lies”, said that the initial revelations “give the appearance of a conspiracy to defraud, by parties working in taxpayer funded agencies collaborating on ways to misrepresent material on which an awful lot of taxpayer money rides.”

The climate, defined as long term trends, and the weather has nothing whatever to do with human activity and suggesting it does reveals the depth of contempt that people like Al Gore and his ilk have for humanity and those fleeced by purchasing “carbon credits” or paying more for electricity when their utility does.

The East Anglia CRU charlatans have been exposed. Most certainly, the United Nations IPCC should be disbanded in disgrace. It belongs in a museum of hoaxes right beside the Piltdown Man and the Loch Ness Monster.