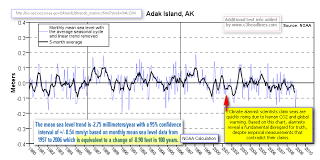 For years (decades?), climate alarmist scientists have been claiming that the oceans were rising with “unprecedented” speed due to human-caused global warming. These scientists claim that because of all the melting of glaciers and ice sheets, due to human-caused warming, the sea levels are rising at an accelerated pace and will continue to so – up to a 2

0 foot rise by the end of the century is predicted. If this accelerated sea level rising is happening as claimed, then it should be evident across the world. Fortunately, the sea rise at the Adak Island, Alaska is not happening at all – seas levels are declining at Adak. This is just but one example of ocean facts countering sea-rise alarmism hype – more to follow. (On average, recent satellite measurements put global ocean level increases at 3mm/year or 1 foot/century.)