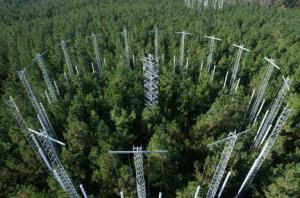 Pine trees grown for 12 years in air one-and-a-half times richer in carbon dioxide than today’s levels produced twice as many seeds of at least as good a quality as those growing under normal conditions, a Duke University-led research team reported Aug. 3 at a national ecology conference.Carbon dioxide readings that high are expected everywhere by mid-century. The findings suggest some woody tree species could, in the future, out-compete grasses and other herbaceous plants that scientists had previously found can also produce more seeds under high-CO2, but of inferior quality. “Even if both groups were producing twice as many seeds, if the trees are producing high-quality seeds and the herbaceous species aren’t, then competitively you can get a shift,” said Danielle Way, a Duke post-doctoral researcher. Way is scheduled to present the results at a poster session on Aug. 3 during the Ecological Society of America’s 2009 annual meeting in Albuquerque, N.M. She is also first author of a report on the study scheduled for publication in the research journal Global Change Biology. Way and her co-researchers collected, counted and analyzed seeds produced at the Duke Free Air CO2 Enrichment (FACE) site in Duke Forest, near the university’s campus. There, growing parcels of loblolly pine trees have been receiving elevated amounts of CO2 around the clock since 1997 in a Department of Energy-funded project designed to simulate natural growing conditions. Their analysis found the high-CO2 loblolly seeds were similar in nutrient content, germination and growth potential to seeds from trees growing under present-day CO2 concentrations. “If anything, they actually seem to be slightly better seeds rather than more seeds of poorer quality,” Way said. “The notion here is that if the trees are producing more high-quality seeds at high CO2 compared to grasses and herbs, then the trees may be at an advantage,” added study participant Robert Jackson. Jackson is Way’s advisor at Duke, where he is a biology professor, as well as professor of global environmental change at the university’s Nicholas School of the Environment. The ultimate competitive outcome will depend on how other trees comparatively respond to high-CO2, said James Clark, another Duke biology professor and Nicholas School professor of the environment who also participated in the study. “We don’t know that yet, because we only have estimates for loblolly pines,” Clark said. Other study participants included Shannon LaDeau, now at the Cary Institute of Ecosystem Studies at Millbrook, N.Y.; Heather McCarthy, now at the University of California at Irvine; Ram Oren, a Nicholas School ecology professor who directs the FACE experiments; and Adrien Finzi, an associate biology professor at Boston University.Source