30 years later, Arctic and Antarctic ice has actually increased, and is growing at fastest rate in recorded history.

Next time you see the news reports of “catastrophic” ice loss at the poles, try to remember you’re watching a ratings-oriented entertainment program driven by hysteria and propaganda. Ditto for the Greenpeace rallies chock full of ‘climate change’ propaganda to secure their funding. Ditto for Al Gore’s un-scientific Star Trek film, now proven to be bursting with junk science. Now, check the facts for yourself. Why do we continue to hear the scare stories about Antarctic ice vanishing when it is, in fact, breaking records for ice growth? Well, it’s simple. Your local media outlet always shows you seemingly amazing images of massive melting and chunks of ice breaking away — but always neglect to mention that it is normal, and happens every single year during the spring/summer melt. Oh, and it’s been happening since forever began, by the way.

Be aware when they show the “before” and “after” pictures on your 6 o’clock news. The “before” pictures are always from the winter season and the “after” are summer images. So, to properly educate you, take a look at actual images of ice concentrations from the same time of year in comparison, spread out over three decades. Not only is the interior growing but so is the sea ice. Sea ice levels are higher now than when satellite records began.

Antarctic Ice Extent and Concentration for October 1979 and October 2008

From the National Snow and Ice Data Center, University of Colorado

Not a huge increase but certainly notable since everyone in the controlled media has been screaming about Antarctic ice melt off, obviously that is not happening. Interior ice is increasing at an even greater rate. According to NOAA GISS data winter temperatures in the antarctic has actually fallen by 1°F since 1957, with the coldest year being 2004. All the while global CO2 levels have gone up and the main stream media has been reporting near catastrophic warming conditions, all while global temperatures have been falling for a long time now. The MSM and certain segments of the scientific* community truly must have no shame. (JC’s note: *Scientific, meaning the IPCC & Al Gore – of which very few are real scientists, compared to the over 31,000 real scientists who have signed a petition clearly stating that man-made climate change is totally non-existant, the globe is not warming unnaturally, and creating more CO2 emissions would be very positive for the environment, not negative!)

”While the penguins would normally turn back when they hit the warmer Benguela waters, the current has been “exceptionally cold” this year” – The Washington Post

The Antarctic penguins must not be enjoying all of this cold and ice too much as hundreds, perhaps thousands, are migrating to the warm beaches of Brazil. More than they’ve ever seen. Hey, wouldn’t you migrate to Brazil if you lived in Antarctica and it started getting even colder than normal?!?

HERE’S SOME MORE REALLY FUN STUFF YOU PROBABLY WON’T SEE ON THE NEWS! 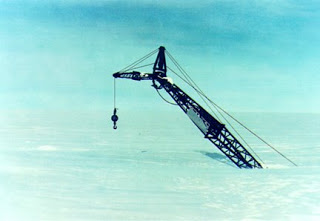 In the mid 1960s, ITT built a power transmission line in Antarctica. The transmission towers stood 115 feet tall. As you can see in this photo, all but the top 30 feet of the towers are now buried in ice.

Worldwide glaciers growing….but heaven forbid the media will inform you of this fact.

An Associated Press article written by Samantha Young admits that all seven glaciers on California’s Mount Shasta are growing. The article then goes on to rhapsodize about “global warming”. The seven tongues of ice creeping down Mount Shasta’s flanks “are the only known glaciers
in the continental U.S. that are growing,” the article says.

How convenient. Let’s limit our discussion to the
continental U.S. That way we can ignore the glaciers
in Alaska that are advancing a third of a mile per year!

Oh, the article does throw a bone to Alaska. “Glaciologists say most glaciers in Alaska and
Canada are retreating, too,” the article says, “but there are too many to study them all.”

How convenient. Let’s make sure to study only the ones that are retreating. And forget to mention that it’s normal for them to retreat, while others grow. Musta learned that trick from Al Gore himself.

“Although Mount Shasta’s glaciers are growing, researchers say the 4.7 billion cubic feet of
ice on its flanks could be gone by 2100,” the article continues.

Let me see if I understand this. The glaciers on Mount
Shasta are growing (one has doubled in size) … but they’re
going to be gone by 2100?

“Climate change is causing roughly 90 percent of the world’s mountain glaciers to shrink,”
the article continues.

Please let your local news sources and Greenpeace activists know that you don’t appreciate the kind of disinformation they keep shoving down our throats. Eh? Not everyone has the time to go out and research the actual facts for themselves!

This concludes my weekly LOL in Al Gore’s face.

12 thoughts on “Ice caps and glaciers growing around the world, penguins looking for warmth!”