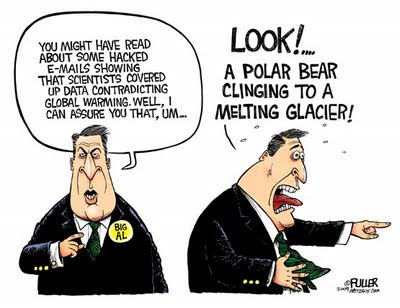 The findings of the Intergovernmental Panel on Climate Change (IPCC) are often held up as representing “the consensus of scientists”—a pretty grandiose and presumptuous claim. And one that in recent days, weeks, and months, has been unraveling. So too, therefore, must all of the secondary assessments that are based on the IPCC findings—the most notable of which is the EPA’s Endangerment Finding—that “greenhouse gases taken in combination endanger both the public health and the public welfare of current and future generations.”

Recent events have shown, rather embarrassingly, that the IPCC is not “the” consensus of scientists, but rather the opinions of a few scientists (in some cases as few as one) in various subject areas whose consensus among themselves is then kludged together by the designers of the IPCC final product who a priori know what they want the ultimate outcome to be (that greenhouse gases are leading to dangerous climate change and need to be restricted). So clearly you can see why the EPA (who has a similar objective) would decide to rely on the IPCC findings rather than have to conduct an independent assessment of the science with the same predetermined outcome. Why go through the extra effort to arrive at the same conclusion? The EPA’s official justification for its reliance on the IPCC’s findings is that it has reviewed the IPCC’s “procedures” and found them to be exemplary. Below is a look at some things, recently revealed, that the IPCC “procedures” have produced. These recent revelations indicate that the “procedures” are not infallible and that highly publicized IPCC results are either wrong or unjustified—which has the knock-on effect of rendering the IPCC an unreliable source of information. Unreliable doesn’t mean wrong in all cases, mind you, just that it is hard to know where and when errors are present, and as such, the justification that “the IPCC says so” is no longer sufficient (or acceptable). Himalayan Glaciers The IPCC has actually admitted that, in at least one area, its procedures have failed:

…It has, however, recently come to our attention that a paragraph in the 938 page Working Group II contribution to the underlying assessment refers to poorly substantiated estimates of rate of recession and date for the disappearance of Himalayan glaciers. In drafting the paragraph in question, the clear and well-established standards of evidence, required by the IPCC procedures, were not applied properly. The Chair, Vice-Chairs, and Co-chairs of the IPCC regret the poor application of well-established IPCC procedures in this instance. This episode demonstrates that the quality of the assessment depends on absolute adherence to the IPCC standards, including thorough review of “the quality and validity of each source before incorporating results from the source into an IPCC Report”. We reaffirm our strong commitment to ensuring this level of performance.

It turns out, that in this case of Himalayan glaciers (apparently a favored topic of the IPCC head Dr. Rajendra Pachauri for raising funds for a non-profit that he heads), the IPCC’s findings—that the glaciers would largely disappear by the year 2035 (and endanger the water supply for hundreds of millions of people, as well as lead to increased avalanches and mudslides) as a result of anthropogenic global warming—were apparently based on some comments made by one researcher to the press. Those statements were later included in a World Wildlife Fund report that was the source cited by the IPCC. Dr. Pachauri vehemently denied accusations of bad procedures when they were first made, going as far as calling evidence supporting the accusations “voodoo science”. Now, with the IPCC’s admission of its errors, an apology is being sought from Dr. Pauchari becasue of his remarks. The latest scuttlebutt on this issue is that several folks in the IPCC knew of these problems for some time, but that they allowed them to perpetuate anyway and that other attempts to correct them by other IPCC scientists were lost in the mail. This doesn’t speak so highly for the “procedures.” Attribution of Increasing Damages to Rising Temperatures Another issue which has gotten the IPCC’s attention in recent days has been its attribution of increasing weather-related losses to rising temperatures from human activities. In this case, the IPCC decided to issue a statement in which it denied that its “procedures” went astray—despite clear and growing evidence to the contrary. Such a denial in the face of mounting evidence seems like it could do even more harm than actually admitting another goof (but then again, how many major goofs can the IPCC really admit to without having to scrap the whole thing?). The problems contained in the IPCC assessment have been well-documented by a series of posts by Roger Pielke Jr. at his blog (here, here, here, and here). Pielke Jr. builds a pretty convincing case that the IPCC gave short shrift to the body of peer-reviewed literature that concluded that a clear linkage between the rising levels of weather-related damages and rising temperatures was not yet demonstrable. The rapidly growing effect of demographic changes (population, wealth, etc.) overwhelms the influence of the weather and confuses issues of attribution. Yet, somehow, the IPCC’s assessment established that increasing losses were linked to rising temperatures. Pielke Jr. traces this to a “single non-peer reviewed” study “cherrypicked” from a “workshop.” Dr. Pielke Jr. had this to say about the IPCC’s recent statement upholding its findings and its claims that “[i]n writing, reviewing, and editing this section, IPCC procedures were carefully followed to produce the policy-relevant assessment that is the IPCC mandate”:

Carefully followed procedures? Let’s review: (a) The IPCC relied on an unpublished, non-peer reviewed source to produce its top line conclusions in this section, (b) when at least two reviewers complained about this section, the IPCC ignored their complaints and invented a response characterizing my views. (c) When the paper that this section relied on was eventually published it explicitly stated that it could not find a connection between rising temperatures and the costs of disasters.

This press release from the IPCC would have been a fine opportunity to set the scientific and procedural record straight and admit to what are obvious and major errors in content and process. Instead, it has decided to defend the indefensible, which any observer can easily see through. Of course there is no recourse here as the IPCC is unaccountable and there is no formal way to address errors in its report or its errors and misdirection via press release. Not a good showing by the IPCC.

Basically, with regards to this issue, the IPCC “consensus of scientists” isn’t even the consensus of the leading scientists actively studying the topic, but reflects the wishful thinking of one or two chapter authors and, no doubt, the IPCC designers, as well. Medieval Warm Period Many more examples of the IPCC “procedures” can be found courtesy of the Climategate emails. For instance, in Chapter 6, the paleoclimate chapter of the IPCC’s most recent Fourth Assessment Report (AR4), it is the strong sentiment of one of the chapter’s coordinating lead author, Jonathan Overpeck, that he wants to dismiss the Medieval Warm Period (MWP)—a period of relatively high temperatures that occurred about a thousand years ago. If the MWP were found to be as warm as recent conditions, then the possibility that natural processes may play a larger role in recent warming is harder to ignore—thus the need to dismiss it. The task of doing so fell on Keith Briffa, who developed the contents of a special box in IPCC AR4 Chapter 6 that was apart from the main text and which focused on the WMP. Here’s the advice issued to Briffa by Overpeck:

I get the sense that I’m not the only one who would like to deal a mortal blow to the misuse of supposed warm period terms and myths in the literature. The sceptics and uninformed love to cite these periods as natural analogs for current warming too – pure rubbish. So, pls DO try hard to follow up on my advice provided in previous email. No need to go into details on any but the MWP, but good to mention the others in the same dismissive effort.

Briffa attempted to complete his task by presenting a well-chosen collection of data that showed that while some proxy temperature reconstructions did show a warm period about 1,000 years ago, others did not. He concluded that a more complete picture indicated that the higher temperatures during the MWP were “heterogeneous” (regionalized), while the warming of the late 20th century has been “homogeneous” (i.e. much broader in spatial extent)—confirming that current conditions were likely unprecedented during the past 1,300 years. Briffa received congratulations for a job well done by Overpeck:

[A]ttached is Keith’s MWP box w/ my edits. It reads just great – much like a big hammer. Nice job.”

Thus, that conclusion driven by Overpeck’s desires, written by Briffa, perhaps reviewed by the chapter’s other authors (with varying degrees of knowledge about the subject), is now preserved as “the consensus of scientists. But apparently, that consensus isn’t accepted by other leading paleoclimate researchers. In a peer-reviewed article published in 2009 in the journal Climatic Change, paleo-researchers Jan Esper and David Frank carefully re-examined the same proxy temperature reconstructions used by Briffa and came to conclude that the IPCC was unwarranted in declaring that the temperatures during the MWP were more heterogeneous than now. Here is the abstract from that paper:

In their 2007 report, IPCC working group 1 refers to an increased heterogeneity of climate during medieval times about 1000 years ago. This conclusion would be of relevance, as it implies a contrast in the spatial signature and forcing of current warmth to that during the Medieval Warm Period. Our analysis of the data displayed in the IPCC report, however, shows no indication of an increased spread between long-term proxy records. We emphasize the relevance of sample replication issues, and argue that an estimation of long-term spatial homogeneity changes is premature based on the smattering of data currently available.

Summary So here we have multiple examples of the IPCC “procedures” and how “the consensus of scientists” is formed. In one case, the “consensus” was formed from comments made by a single scientist to the press; in another, the IPCC “consensus” conflicts with the consensus of scientists actually active in the topic of concern; and in the third case, the IPCC “consensus” is driven by the desires of one of the coordinating lead authors, and is now disputed by other members of the field. Others examples seem to be coming to the light daily (see here about conclusions regarding future agricultural productivity in Africa, or here about the IPCC pushing preconceived ideas). In light of what we now know, I suggest that from now on, all IPCC products come with the following warning label:

“The findings of the IPCC reports were developed in advance and furthered by a careful selection from whatever material could be found to support them. In some cases, supporting material was developed or fabricated where none could otherwise be located. As such, these findings may not necessarily reflect the true state of scientific understanding. Use at your own risk.”