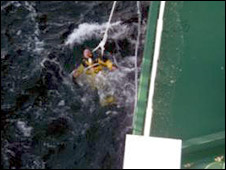 An expedition team which set sail from Plymouth on a 5,000-mile carbon emission-free trip to Greenland have been rescued by an oil tanker. Raoul Surcouf, Richard Spink and skipper Ben Stoddart sent a mayday because they feared for their safety amid winds of 68mph (109km/h). All three are reportedly exhausted but safe on board the Overseas Yellowstone. Mr Surcouf, 40, from Jersey, Mr Spink, 31, and Mr Stoddart, 43, from Bristol, are due to arrive in the USA on 8 May. ‘Heartfelt thanks’ The team, which left Mount Batten Marina in Plymouth on 19 April in a boat named the Fleur, aimed to rely on sail, solar and man power on a 580-mile (933km/h) journey to and from the highest point of the Greenland ice cap. The expedition was followed by up to 40 schools across the UK to promote climate change awareness. But atrocious weather dogged their journey after 27 April, culminating with the rescue on 1 May after the boat was temporarily capsized three times by the wind. In one incident Mr Stoddart hit his head and the wind generator and solar panels were ripped from the yacht.

Water was also getting into the boat from waves breaking over it and the crew took refuge in the forward cabin. The crew were 400 miles (644km) off the west coast of Ireland when they sent a mayday to Falmouth coastguards who co-ordinated the rescue with Irish coastguards. The transfer from the Fleur to Overseas Yellowstone was achieved in 42mph (67km/h) winds. Mr Spink and Mr Surcouf were able to jump across to a rope ladder. But Mr Stoddart fell into the sea, was thrown a line by the crew and hauled aboard. Team spokeswoman Jess Tombs said: “They are all overwhelmingly relieved to be safe. “They would like to give heartfelt thanks to the coastguards for their professionalism as well as to the outstanding captain and crew of the Overseas Yellowstone.” Source