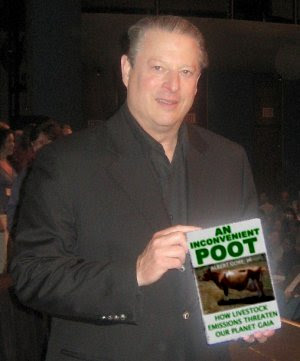 The Associated Press reports that the Copenhagen Summit on global warming climate change is crumbling as we speak.

Climate campaigner Al Gore has canceled a lecture he was supposed to deliver in Copenhagen.

The former vice president and Nobel Peace Prize winner had been scheduled to speak to more than 3,000 people at a Dec. 16 event hosted by the Berlingske Tidende newspaper group.

Speaking to BBC Radio 4’s The World Tonight, Prof Mann said: “I can’t put myself in the mind of the person who wrote that email and sent it. I in no way endorse what was in that email.”

Prof Mann also said he could not “justify” a request from Prof Jones that he should delete some of his own emails to prevent them from being seen by outsiders.

Yes, I’m sure Mann is as pure as the driven snow. After the snow’s been painted yellow by a cow that’s freezing to death because of global warming.