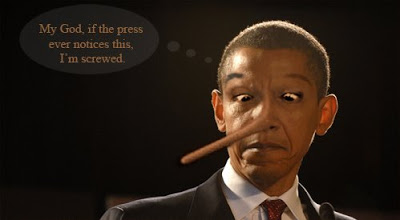 Watching President Obama’s third prime time press conference in three months, I found myself wondering how the White House press corps had been reduced to a bunch of bit players in the great drama of Barack Hussein Obama. They are absolutely in love and enthralled.

He, of course, knew exactly who he was going to call on so it hardly mattered that the other reporters even showed up. They were just part of the scenery. Those who were called upon did not ask anything that evoked anything more than his typical long response designed, I suspect, to bore everyone to the point where the original question was forgotten. There were no follow-up questions. The New York Times reporter was pathetic, an embarrassment to the profession of journalism.

Notably, this third press conference attracted far fewer viewers than numbers one and two. After the first hundred days of White House orchestrated massive media exposure, people have experienced Too Much Obama.

All this, however, probably wouldn’t matter were not for the fact that the President of the United States is telling some very big lies and not being called on them. From my personal perspective, Obama seems to lie about everything all the time. On the campaign trail a certain amount of hyperbole is expected, but when the liar is the President, it becomes a serious matter.
Just about everything Obama said is a flat-out lie

In remarks in Arnold, Missouri on April 30, released by the White House Press Office, the President said,

“The average person problem thinks, yes, climate change, that’s kind of a drag, but it’s not one of my top priorities—because you don’t really see it or feel it, it doesn’t hit your pocketbook, it doesn’t have to do with your job directly. And so the tendency is just to kind of push it off. People think, well, this just has to do with polar bears, and I feel bad about polar bears, but I’ve got other things to worry about.”

For the record, the polar bear population is just fine and has been expanding for decades since the 1950s.

“I don’t think people fully appreciate the potential damage—economic damage, as well as environmental damage—that could be done if we are not serious in dealing with this problem,” said Obama. “If the temperature goes up a couple of degrees, well, it will change weather patterns pretty significantly. It could create droughts in places where we haven’t had drought; it could bring insect-born diseases up into places like Missouri that we haven’t seen before.”

Obama went to say, “You’re now looking at huge, cataclysmic hurricanes, complete changes in weather patterns. Some places will get hotter, some places will get colder. Our economy would be disrupted by tens of trillions of dollars. So this is no joke. And the science shows that the planet is getting warmer faster than people expected.”

Just about everything Obama said is a flat-out lie. It begins with the biggest lie of all; that human beings have any control or influence over the weather. When I say weather, I mean what is happening outside right now. When I say climate, I am talking about trends that involve hundreds of years.

To claim that the Earth “is getting warmer faster than people expected” is a more specific lie. The Earth has been in a cooling cycle for a decade. No doubt the President will, at some point, say he received poor information, but the truth is he knows full well that “global warming” is the vast hoax that underpins the justification for his administration to impose a punishing, needless tax on all energy use via the “cap and trade” legislation making its way through Congress. It is a so-called “carbon tax” and it will do more harm to the nation’s economy than anything anyone can imagine.

Earth to Obama! All the recent polls regarding “global warming” demonstrate that most Americans know it is a pile of crap. A Zogby survey found that only 30% support “cap-and-trade” of emissions, while 57% oppose it and 13% were not sure. In February, a Rasmussen telephone survey revealed that 54% of U.S. voters said the news media “make global warming appear worse than it really is. Only 21% say the media present an accurate picture.”
President’s lapdog media

So the President is lying about something most Americans distrust and don’t believe. Meanwhile, the lapdog media continues to report “global warming” despite the fact that more than half the voters have concluded they are just hyping it. And that’s exactly what they and the President are doing.

A voter backlash is coming, but those living in the D.C. bubble and drinking deeply of the Potomac waters have no clue.