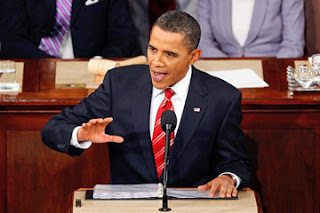 Finally, Obama’s getting the message that most people realize cap-and-tax is nothing more than a scam. In fact, he attempted to (quickly) sell his climate bill for reasons OTHER than alleged climate change. All in all, climate change took a back seat and only appeared for a few seconds out of his 70 minute speech. Hopefully it will soon be out of the backseat and tossed in the trash where it belongs.

From the crying hippies at Treehugger.com:
“President Obama’s first State of the Union speech highlighted many of our current challenges, but focused primarily on jobs, the economy and health care. Notably absent were visionary plans to tackle climate change in a meaningful way. Has climate change been drowned by the rising seas of economic concerns? melted by debates over health care?
The President spoke about a new jobs bill, tax credits, the health care debate, the bailout bill, and the wars in Afghanistan and Iraq. When it came to the climate change, his comments were limited to the Clean Energy and Climate Bill.
Sadly, some of his proposed initiatives include such un-TreeHugger strategies as:

Facing grumbles from the Right, he said that even if you doubt the “overwhelming scientific evidence” for climate change “providing incentives for energy efficiency and clean energy are the right thing to do for our future because the nation that leads the clean energy economy will be the nation that leads the global economy, and America must be that nation.” The failure of the Copenhagen Conference and changing public sentiment may be behind the absence of a meaningful climate change vision in President Obama’s speech. Startling new surveys are showing that public concern over climate change is on the decline in America. The percentage of Americans who think global warming is happening has fallen to 57% and only 47% of Americans think that human activity is responsible for climate change.”—-Haha. Finally some really good news. And Obama even gives everyone a good laugh when he spoke about climate “science” tonight. Check it out: