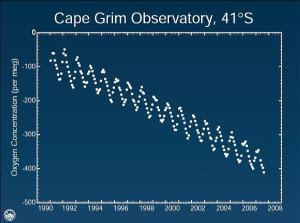 A new threat to all life on the planet? And yes, it’s YOUR fault! Coming soon on your local news! (You’ll see…just wait!)

Atmospheric oxygen levels are declining! The sky is falling! Accompanied by scary graphs and even more frightening scenarios, the new environmental disaster of oxygen depletion seems poised to overtake the crumbling CO2 fright as the next great challenge to mankind’s survival. Someone call Al Gore! He needs to jump on the next big cash cow! Maybe he can create another “consensus” of celebrity psuedo-scientists to support him and get the mega corporations to milk it for all it’s worth! Soon our school systems will be educating the “facts” to our naive innocent children, thus inspiring even more unfounded fear and anxiety in their lives! Oh yeah, and maybe he’ll make another one of his Hollywood science fiction movies too! -JC

The story is already making converts in the media, which includes Peter Tatchell of the U.K. Guardian, who recently ran a breathless story on possible consequences, including “genetic mutations, hormonal changes…cancer, degenerative diseases” and even death.

Tatchell says the rate of decline has dramatically increased in the past 30 years. He calls for immediate “scientific research” to examine the problem, blissfully unaware that several dozen researchers have been doing just that for decades.

The decline is predictably pinned on “deforestation” and mankind’s “burning of fossil fuels”. Once again, man is trashing the planet. Sorry if I just rolled my eyes again…lol.
The only problem? It’s pure bunkum. Unlike the trace gas CO2, oxygen comprises over 20% of the atmosphere. Oxygen is the most abundant element in the earth’s crust; it accounts for nearly 90% of the mass of the ocean. While we can’t breathe water, atmospheric oxygen levels have been measured since the 1890s and haven’t varied to within three significant digits (a tenth of a percentage point). Also, forests and greenery around the world have been growing at a fast rate and have increased approximately 40% during the last 50 years, and it’s all thanks to that wonderful CO2, which is, in fact, a very beneficial gas which encourages plant growth! Back when the dinosaurs ruled, much of Earth was a lush green paradise, largely due to the fact that CO2 levels were MUCH higher than they are today.
The fearsome decline seen in the graph is the result of misinterpretation, designed to impress. The values given are relative, not absolute, and correspond to changes of a few parts per million. With O2 levels currently at 210,000 ppm, the changes we measure won’t be significant for tens of thousands of years, if then.
I’m sure Mr Gore would love to take a graph like this and project it on a four-story screen, much like his flawed “hockey stick” graph which has now been completely debunked throughout the scientific world. It’s no wonder An Inconvenient Truth has been banned from many public school systems, finally. (Even the high court of England has cited 35 major scientific errors in the film and has labeled it as “political propaganda” not suitable for the education system. Good for them!)
Dr. Andrew Manning of the Scripps Atmospheric Oxygen Research Group tells Daily Tech the miniscule rate of O2 decline is of “no concern whatsoever to human health or any ecosystem”. According to Manning, while fossil fuels do consume oxygen, an ever-increasing amount of plant life in the biosphere offsets the loss. (Thanks, CO2!)
So what is the source of this crackpot idea? Nope, not Gore this time. It stems from the writings of interdisciplinary ex-professor Ervin Lazlo. Lazlo calls himself “the recognized founder of systems philosophy”, a New Age holistic pseudo-science that has unfortunately accomplished nothing useful since he created it 35 years ago. Lazlo is the founder of the Club of Budapest, an environmental group which specializes in “planetary consciousness”. The group shares members and ideas with the Club of Rome best known for the “Limits to Growth” scare of the early 1970s. That led to a book of the same name, which became the best-selling environmental title of all time. The book was roundly called tripe by dozens of esteemed economists, and even later admitted to be nothing more than a caper to gain media attention — none of which seemed to hurt sales. Even today one can still find environmentalists still quoting the book’s conclusions as fact. The environmental movement has a long history of promoting scare stories without a shred of scientific backing. From “Silent Spring” which predicted the global death of all bird life, to forest-demolishing acid rain, to more modern scares such as Alar and GM foods, the climate change hoax, etc, the poor track record of success seems to only stimulate a never-ending stream of new drivel.

At least this time around, you’ve been forewarned.

5 thoughts on “Oxygen Depletion: The Next Great Made-Up Environmental Scare”