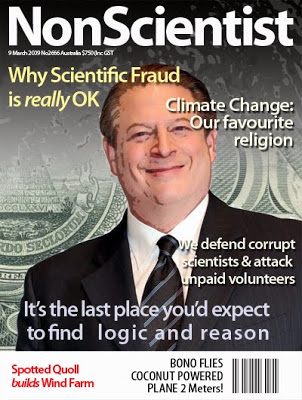 Wow! That Copenhagen package really worked. Global warming has been dramatically reversed. In fact, if Al Gore could see his way to turning the heat back up just a little, most of us would be deeply appreciative… “Climate science” is the oxymoron of the century. There is not a city, town or hamlet in the country that has had its weather conditions correctly forecast, over periods as short as 12 hours, during the past week. This is the “exceptionally mild winter” that the climate change buffoons warned us would occur as a consequence of global warming. Their credibility is 20 degrees below zero. Yet nothing shames them, nothing persuades them to come out of the bunker with their hands high and “fess up”. Patronisingly fobbing off the public with fabricated excuses has become second nature to them. Latterly they have been concocting alibis about the Gulf Stream to explain Britain’s Arctic conditions. Uh-huh? Is it the Gulf Stream that has frozen the Vistula and given Poland a temperature of –25C? Is it the Gulf Stream that has caused the worst blizzards in Beijing since 1951? The entire Northern Hemisphere is frozen. The world looks like a Christmas pudding with icing on the top. That is completely normal, part of the random climate fluctuations with which our ancestors were familiar. Yet fraudulent scientists have gained millions of pounds by taking selective samples of natural climate change, whipping up a Grande Peur and using it to advance the cause of world government, state control and fiscal despoliation of citizens. 2010 should be the year when all that ends. It is time for Zero Tolerance of AGW fraudsters and their political masters. It is time to say: Green taxes? We won’t pay them.
Nor will we vote for or permit to remain in office any politician or party that supports the AGW fraud. This year is one of those rare occasions when we have an opportunity to punish and control our political masters – provided Britons have the will to break with the two-party system. Due to the rise of smaller parties – itself the consequence of the misgovernment of the Lab/Lib/Con consensus – it is a buyer’s market. The rule of thumb should be: any party that supports the global warming scam is ineligible for our votes. It doesn’t matter how ingrained one’s loyalty may once have been to one of the “major” parties, the time has come to impose the popular will on politicians who have learned, since the abolition of capital punishment in 1965, that by forming an anti-democratic consensus they can dictate to the public. The coming general election is going to be an intelligence test. If people realise that voting for the slightly less objectionable choice gets them nowhere, that by holding out for what they really want they can actually obtain it, then we may be able to liberate ourselves from the tree-hugging New/Blue Labour consensus. If we fail to rise to that challenge we shall forfeit the right to complain about five more years of PC oppression. That is the answer: Zero Tolerance of “Green” agendas.Source by Gerald Warner

4 thoughts on “'Climate science' is an oxymoron. Time for Zero Tolerance of Green agendas”