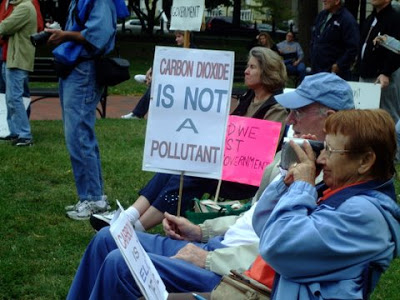 By Paul Bedard, Washington Whispers
A noted geologist who coauthored the New York Times bestseller Sugar Busters has turned his attention to convincing Congress that carbon dioxide emissions are good for Earth and don’t cause global warming. Leighton Steward is on Capitol Hill this week armed with studies and his book Fire, Ice and Paradise in a bid to show senators working on the energy bill that the carbon dioxide cap-and-trade scheme could actually hurt the environment by reducing CO2 levels.”I’m trying to kill the whole thing,” he says. “We are tilting at windmills.” He is meeting with several GOP lawmakers and has plans to meet with some Democrats later this week.READ THE REST HERE.

One thought on “Scientist: We Need More Carbon Dioxide, Not Less”