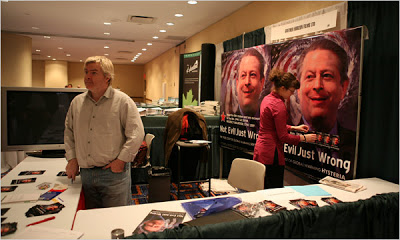 The only global warming we are likely to see any time soon is the heat of battle as the nefarious proponents of the great green hoax face off against the laser minds of scientific truth. The thinkers of the planet have long known that the sun has far more influence on climate than human activities, that climate change is a natural phenomenon, that earth has always gone through cycles of warming and cooling, and that CO2 increases following warmer periods. It is now well established that in the past decade the earth has been cooling, not warming. Global warming is over and we are now starting down the other side of the hill. This, of course, means that any attempt to subdue global warming is bound to succeed, as the problem (if it is a problem) is already resolving itself. At the other end of the field we have the inventors of the great scam called climate change and global warming. These are the great financial and political minds who see much advantage in hijacking a naturally occuring event for their own purposes.

What better plan could there be than using the excuse of stopping climate change and its companion global warming as justification for imposing all kinds of crazy rules to control just about anything in the name of ‘protecting’ the earth — which in this case doesn’t need protecting and is taking care of its own climate just fine.

This Sunday, March 8, the scientific team will make their next move, to be followed no doubt by an immediate move from the political team in the form of loud uproars, further alarmism and denial of the real facts in favor of invented ones. Beginning Sunday, some 500 top climatologists will meet for 3 days in New York to discuss climate change and the global warming hoax. Neither the conference nor its organizer, the Heartland Institute, has received any corporate money to put on this event. In other words, they are not paid to lie and are not prostituting their scientific minds on the street corners of capitalism. The keynote speaker will be the president of the Czech Republic, Vaclav Klaus, who is also the current rotating chair of the European Union. Klaus recently spoke at Davos about the crisis of (the hoax of) climate change. He has also written a book, Blue Planet in Green Shackles, in which he warns that ‘climate change’ has “become a symbol and example of the clash between truth and propaganda.” The 67-year-old economist blames Al Gore for creating unnecessary alarm and has declared,

“The largest threat to freedom, democracy, the market economy, and prosperity at the end of the 20th and at the beginning of the 21st Century is no longer socialism. It is, instead, the ambitious, arrogant, unscrupulous ideology of environmentalism.”

According to the New York Times, the Environmental Protection Agency is now poised to regulate carbon dioxide. Think about the implications of that. Think about what could be regulated to control CO2 — literally everything! Controlling ‘climate change’ is an excuse to do just about anything they want. But it’s all based on a lie, a lie that everyone plays along with because no one wants to stand out. But after the dust settles very few will actually believe it. The events of 2001 were a coup against freedom and what semblance of ‘democracy’ we had. It is a perfect example of how a big, well orchestrated hoax can serve to steal many things from us. There is no reason to believe it would be any different with the climate-change agenda. Here at home, the New Democrats have climbed aboard the bandwagon and are putting all their energy behind ‘green’, ’sustainable’ development. Just how they figure any development can be green is a deep mystery in which only a climate-change guru could reach enlightenment. Ok, maybe I can clarify the ’sustainable’ mystery — perhaps it means that development can be continued endlessly without interruption — a developer’s dream. The BC Conservatives describe their stance toward development as “a balanced approach to protecting the environment while allowing economic activity to take place”. The Liberals have clearly been on the climate-change bandwagon for some time, busy evangelizing such nice wholesome ’solutions’ as compact fluorescents, and diverting rivers to make the fish happier. And if this mother of all protection rackets should accidentally manage to actually reduce CO2, what harm will that do to a planet whose ecosystem already has CO2 in natural balance? What kind of long-term devastation might such meddling cause?

More info on the conference currently taking place can be found HERE.

2 thoughts on “Scientists meet in New York to dispute global warming theory, Al Gore will be a no-show”