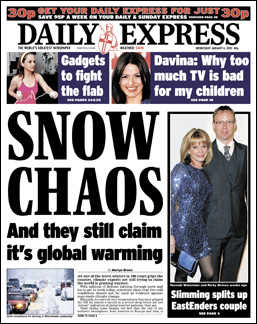 AS one of the worst winters in 100 years grips the country, climate experts are still trying to claim the world is growing warmer.

With millions of Britons battling through snow and ice to get to work today, scientists claim that the cold conditions should not be used as evidence against man-made climate change.

Blizzards, ice and sub-zero temperatures that have gripped the UK for almost a month in a record deep freeze are not “robust” indicators of global weather patterns, they say.

Their claims come despite the fact that the rest of the northern hemisphere, from America to Europe and Asia, is suffering some of the worst winters in living memory.

Huge snowfalls are being witnessed from China and South Korea, across eastern, central and western Europe and to America where even Florida is struggling to record temperatures above freezing.

Last night critics of the global warming lobby said the public were no longer prepared to be conned into believing that man-made emissions were adding to the problem.

One thought on “SNOW CHAOS: AND THEY STILL CLAIM IT'S GLOBAL WARMING”