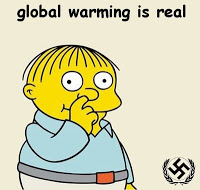 AGW supporters could not argue facts, had to insult instead — as usual

I write to report on a debate that defeated the motion “This House Believes Global Warming is a Global Crisis” during a meeting of the St Andrews University Debating Society. It is difficult to arrange a debate of anthropogenic (that is, man-made) global warming (AGW) because few proponents of AGW are willing to face such debate. They know from past experience that they always lose such debates because there is no evidence that AGW exists and much evidence that it does not.

However, on Wednesday 4 March 2009, the St Andrews University Debating Society held their debate of the motion, “This House Believes Global Warming is a Global Crisis” in the Old Parliament Building, St Andrews. The debate was organized and presided over with exemplary efficiency and professionalism by the Speaker of the Society, Ms Jessica Siegel. It was conducted with all the pomp and ceremony that could be expected of an ancient society of so ancient and prestigious a university.

And the debate was lively, informative and entertaining. It got emotional at times. Some of the contributions from the floor were of exceptionally high quality. But, it was somewhat spoiled by the weakness of the proponents of the motion. (I have good reason to suspect this weakness is because stronger speakers could not be obtained to propose the motion. If so, then it is yet another example of leading proponents of AGW fearing to face their critics in open debate).

The motion was opposed by myself, and Nils-Axel Morner, Leader of the Maldives International Sea-Level Project who was awarded the `Golden Contrite of Merits’ by Algarve University, Viscount Monckton of Brenchley, Former advisor to then UK Prime Minister Margaret Thatcher and now an Investigator of Scientific Frauds.

Each speaker was given a strict maximum of 7 minutes to speak. The speakers would alternate between proponents and opponents of the motion until all 6 had spoken. No speaker was allowed to speak more than once except to raise a point of information, order, or etc.

The proponents had clearly not prepared. They were not co-ordinated in their presentations, they each lacked any significant knowledge of the science of AGW, and they each assumed that AGW is a fact. None of them made a substantial presentation of arguments supporting the motion, and they all (including the politician!) lacked adequate skills at public speaking. The opponents of the motion were a sharp contrast to that. They each have significant expertise in their subject, and they had agreed the case they were to put and how they were to put it. Also, they are all very competent public speakers and their very different styles made their presentation much better than the sum of its parts.

Finnie spoke first. He argued that AGW is a fact because the United Nations (UN) Intergovernmental Panel on Climate Change (IPCC) has published its Fourth Assessment Report (AR4) that says the IPCC is “90% certain” that AGW exists. From this he claimed there is a “crisis” because governments are failing to give the matter sufficient importance. It is necessary for governments to decide a treaty that would follow-on from the Kyoto Ptotocol that intends to constrain emissions of greenhouse gases (GHGs) but ends in 2012. The decision needs to be made at a meeting later this year.

I replied by outlining the case for the opposition. My speech is copied here. It asserts that governments do need to have policies on climate change but empirical evidence denies the existence of AGW and so there is no need to constrain fossil fuel emissions. Indeed, the harm caused by the emission constraints would be greater than any harm that AGW could induce if it were to exist.

Robinson’s response was very angry. He seemed to think attacking the opposition speakers would provide a victory for the motion. Almost his entire speech was attempted defamation of the opposition speakers. Within seconds of starting to speak he had accused them of being “like supporters of the Nazis in 1930s Germany” (my family lost everything in the blitz so I did not take kindly to that). The speakers on the opposition side “could not get anything published in peer-reviewed journals” (Morner and I each shouted out that we have and we do). And much of the same. He said people and governments must act to stop global warming (but he did not say how they should act) because – according to him – if a person had an elevated temperature of 2 degrees then he would die so we cannot let the Earth get 2 degrees hotter in case that kills the Earth.

Morner then gave a witty, entertaining and informative lecture on sea level change. The major potential threat from AGW is severe sea-level change. He interacted with the audience and selected one individual to jape with (his skill at this selection was later demonstrated when that individual stood and gave a speech that won the prize – of a Society neck-tie – for best speech from the floor). Morner presented data that showed sea level is not rising as a result of AGW at a detectable rate anywhere.

Norminton then spoke to conclude the case for the proponents of the motion. Like Finnie he seemed to be extremely nervous: both were shaking during their presentations. Norminton’s hand was shaking so much he put it into his pocket. (I know others interpret this to be nervousness, but I think it was extreme anger: Norminton had not expected any opposition to the motion, and the assertion of clear evidence that AGW does not exist was – to him – an outrage too hard to accept.) Also, like Finnie, he did not address the motion. He said he was not a scientist so he had to accept the word of scientists about global warming and scientists agree that global warming is real and man-made. He said, the speakers on the opposition side were “not scientists”. Lord Monckton interjected that “Courtney and Morner are”. And Norminton replied, “So was Mengele.” Monckton raised a Point of Order demanding withdrawal of the remark. Norminton lacked the wit to withdraw and move on, so he refused to withdraw. Monckton persisted pressing the Point of Order and Norminton continued to refuse to withdraw. Only moments before Morner had made himself the lecturer the students would most like to have, and support for Norminton drained away as he insisted that Morner was akin to a murderer operating in a Nazi concentration camp. Norminton continued by saying the threat of global warming was real, and it was killing polar bears, but it is not clear that anybody was listening to him.

The debate then opened to the floor. Four persons each spoke well. One gave a balanced presentation and the other three spoke in favour of the motion. But by then the debate had been settled. Prior to the debate the opponents of the motion had expected to lose the vote because the students have been exposed to a lifetime (i.e. their short lifetime) of pro-AGW propaganda. We consoled ourselves with the certainty that we would win the arguments because opponents of AGW have all the facts on our side. But in the event we won both. The motion was defeated when put to the vote.