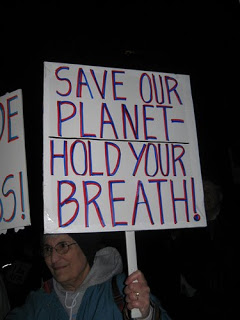 Just when you thought “global warming” has been put to rest by the revelations of how the computer models supporting the hoax had been deliberately falsified to “hide the decline” in the Earth’s temperature, along comes the next Big Lie, focused again on carbon dioxide (CO2).

Wednesday, January 13, has been designated “Wear Blue for Oceans Day” by some coalition calling itself Clean Ocean Action. I don’t even care whose funding this scam, but Friends of the Earth is proudly announcing it is part of it.

They are still smarting over the December debacle in Copenhagen despite being “one of the main groups organizing a December 12 march that attracted more than 100,000 participants…” The FOE neglected to mention they all stood out in a snow storm to make their voices heard on the way the Earth was warming.

Perhaps sensing that people might begin to wonder where all the global warming had gone since a global cooling cycle began in 1998, these perpetrators of the fraud turned their attention to the fact that the same CO2 that was supposed to “cause” global warming was nonetheless building in the atmosphere and that means in the oceans as well.

At far back as February 2009, these scare mongers organized an international symposium, the second one actually, on “The Ocean in a High-CO2 World.” It brought together “150 marine scientists from 26 countries” who allegedly are “calling for immediate action by policy-makers to sharply reduce CO2 emissions so as to avoid widespread and severe damage to marine ecosystems from ocean acidification.”

An article in Science Daily reported that “The scientists note that ocean acidification is already detectable and is accelerating.”

What these scientists are more interested in detecting is where the next wasted billions in government and foundation grants can be found.

The oceans of the world comprise some 70% of the Earth’s surface. They are like the lungs of the Earth, absorbing and releasing carbon dioxide. They have been doing this for billions of years and a rise in the amount of CO2 is essentially meaningless.

“It is well established among researchers that the uptake of increased amounts of carbon dioxide will make ocean water more acidic as the gas dissolves to create carbonic acid,” said the Science Daily article and, to scare you just a bit more, “Ocean chemistry is changing 100 times more rapidly than in the 650,000 years that preceded the modern industrial era…”

The global warming fraud was based on the assertion that, as the Earth encountered greater industrialization, the increased use of oil, natural gas, and coal as sources of energy, the CO2 released was “causing” the Earth to warm exponentially.

The only problem with that “theory” is that it was (1) based on phony computer models and other false interpretations of data, and (2) the latest, perfectly natural climate cycle, is causing havoc around the world by dumping mountains of snow everywhere along with breaking cold temperature records faster than new readings can be taken.

So, please, do not “Wear Blue for Oceans Day” on Wednesday because it will only indicate you are one of the idiots who still believe in global warming and that you are now prepared to further confirm that by thinking the oceans cannot handle a rise in CO2 in the same fashion they have for eons.

For the scientifically inclined, check out
http://www.treehugger.com/files/2009/07/noaa-ocean-temperatures-june-2009-warmest-on-record.php

Why is it important to know that global ocean temperatures are the warmest since records began in 1880? Because the colder the water, the more carbon dioxide it retains. Warmer oceans would generate less, not more acidification.

One thought on “The Next Big Hoax: Ocean Acidification”